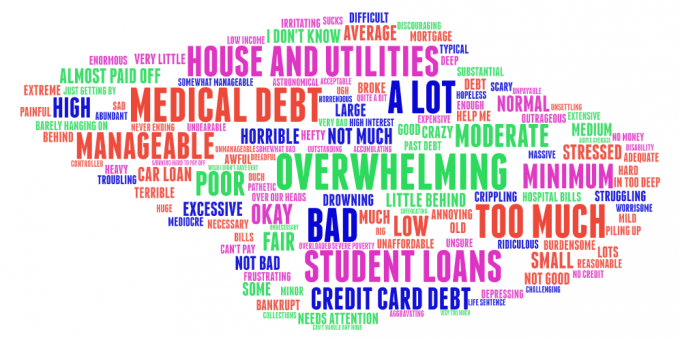 While debt can be an effective tool for consumers to achieve a financial goal, a patchwork of protections – at both the federal and state levels – can lead consumers towards a spiral. It should be unsurprising then that when asked to describe the debt they currently have, clients from Indiana’s Community Action Agencies responded with words like “overwhelming,” “horrible,” and “excessive.”

During the fall of 2020 and the spring of 2021, INCAA, through its 22 local agencies covering all 92 counties, issued a survey to neighbors and clients to collect demographic, general well-being, COVID-19, and data on other key areas of interest. Survey respondents (5,882 total) were asked to identify both the type of debt (among six choices) and amounts (within specific ranges). Those surveyed were also asked if any of the six debt types were in collections. Descriptive statistics for debt-related questions are discussed below.

In the year defined by a global pandemic, total household debt in the United States and in Indiana reached new heights.

According to the Federal Reserve Bank of New York, nationwide household debt increased by $414 billion (3%) from
2019 to 2020, and initial data for 2021 show this trend may continue through the year.vi Statewide debt levels in Indiana increased at a slightly higher rate (3.6 percent), increasing by roughly $8 billion to $226.5 billion in 2020. This total level equates to $40,770 in household debt per Hoosier (per capita).

Non-mortgage household debt per Hoosier, including auto loans, credit cards, and student loans, has been steadily
increasing since the earlier 2000s and through the 2008-2009 Great Recession. Most notably, student loans as a share of all household debt per capita have more than doubled over the past 15 years. This is unsurprising given the increased availability of federal and private student loans combined with the rising costs of higher education.

Pressures stemming from slow-to-nonexistent wage growth, particularly among low-income, non-White, and female workers, respectively, leave little surprise that many households struggle to cover a $400 expense or to stay current on debt payments. As borrowers fall further behind and delinquent on payments (after 90 days), they face the added risk of the debt being recouped through the collection process

Indiana delinquency rates for household debts have remained relatively stable over the past five years, Due in
part to the federal response to the COVID-19 pandemic, delinquency rates have even fallen – especially student loans in 2020 – as automatic or optional forbearance options, stimulus payments, and enhanced unemployment insurance
benefits provided much-needed security to the most vulnerable workers and families.

Similar discrepancies are evident between white communities and communities of color, contributing to the persistent and growing racial wealth gap.

Establish a maximum, all-in allowable APR at 36 percent and avoid policies that allow lending products to significantly increase the effective costs to consumers. A maximum rate including all fees and finance charges would be a demonstrable step in limiting and preventing predatory lending practices both in Indiana and nationwide. Currently, Indiana is just one of 25 states without strong rate caps. This lack of protection supports debt traps at APRs as high as 391 percent on payday loans. A 36 percent APR has been long recognized and supported by federal regulators and the Department of Defense as a way to combat predatory lending practices and usury while maintaining profitability for lenders. Bipartisan legislation at the federal and state level has been historically introduced to address this issue

Prevent medical debts from being reported to credit bureaus until billing is finalized. Currently, medical debts in the dispute or under review can be placed as delinquent or in collections on a consumer’s credit report. Federal legislation to provide a one-year or longer waiting period would provide consumers with the opportunity to resolve any outstanding claims while protecting their credit scores and reports.x

Protections should be extended that prohibit student loan borrowers from having their tax refunds, social security payments, and other federal payments garnished as permitted by current law. Promote financial literacy and education. In an economy that maintains strong consumer protections, provides a livable wage, and promotes equity and fairness, financial literacy and education can reach their full potential. Services provided by community-based organizations such as Centers for Working Families and Community Action Agencies can help consumers and families obtain the necessary skills to reach financial stability. Unfortunately, current imbalances and disparities present an uphill battle that financial literacy cannot remedy on its own.