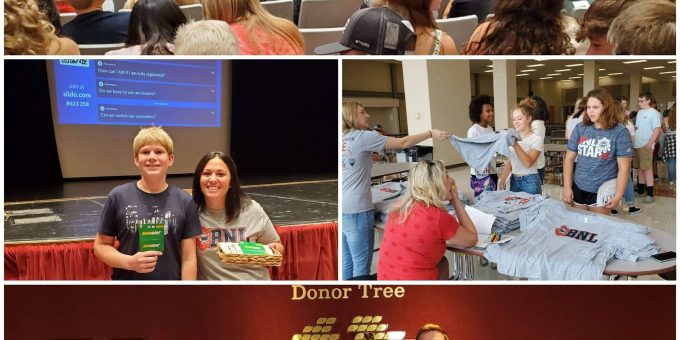 BEDFORD – Bedford North Lawrence High School principal Jordan Key gave the NLCS school board an overview of the three-day “Learn the Way” event for incoming freshmen to BNL this week.

This year 394 freshmen have enrolled at the high school, with 250 attending the orientation event. The freshmen learned how to find their lockers and classrooms, and toured the campus. The event’s goal was to ease freshmen’s first-time jitters they may experience due to the transition from a smaller middle school into a larger school campus.

The students were provided transportation and served lunch. Many former students, parents, and NLCS officials helped with the event to make it successful. Students could have chosen to attend one day or all three days of the offered event.

Next week will be Orientation Week at Bedford North Lawrence High School, a traditional event where all high school students, including Empire students, will have the opportunity to visit the building, get their schedules, ask questions and be ready for the first day of school.

Students will be given their Chromebooks, textbooks, schedules, and information on offered school sports and programs.

Principal Key is excited to begin the school year.

“We had an outstanding spring in many of the sports programs,” said Callahan.

The Semi-State Softball tournament will be held next year at Bedford North Lawrence High School and Kerri Schledecker IHSAA Assistant Commissioner who is in charge of the event absolutely loves our facility, Callahan added.

“She was very impressed and loves the field, especially the outfield seating behind center field,” he added.

The boys’ golf team were the Hoosier Hills Conference champions, finishing second place in the ISHAA sectional. Trevon Hutchinson of the BNL golf team qualified to play in the state finals.

The BNL baseball team had a 19-11 regular season losing to Jeffersonville in sectional play. The boys’ track, Zane Thompson was the ISHAA sectional champion and a state qualifier in the 300 hurdles, James Underwood received honorable mention in all-conference.

Unified Track and Unified Flag Football have been a wonderful addition to the BNL athletic program. Unified Track was Hoosier Hill Conference Champions, and Sectional Champions, placing fifth place in the Regional Competition and advanced to the state finals. They finished 6th out of 20 teams in the state tournament.

Athletes of the year were selected by WBIW.com.

“Students athletes, physical education and band students are going to reap the benefits of the work being done at the athletic fields. It has been a long time coming,” said Callahan. “The football field will be completed next week, and September 3rd will be the first home football game with several alumni attending the event along with coaches.”

“There are a lot of good things going into athletics now, that our student-athletes and coaches will benefit from,” Callahan stated.

“We are excited about the possibility of bringing back big competition for the marching band, which in the past was a huge fundraiser for the program,” Callahan added.

BNL will kick off its fall sporting event the first week of August.