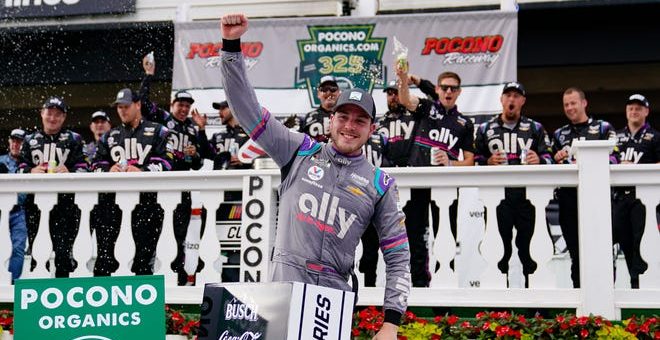 LONG POND, PA. – Brisco finished 24th at Pocono Raceway. Alex Bowman made it six straight wins for Hendrick Motorsports, when teammate Kyle Larson’s Chevrolet blew a tire on the final lap, and he took the checkered flag Saturday at Pocono Raceway for his third Cup win of the season.

His margin over second-place Joe Gibbs Racing’s Kyle Busch was .683 of a second.

Larson, who had won three consecutive NASCAR Cup Series points races, had driven his way back to the position he’s been in for most of the 2021 season — leading the way after passing Hendrick Motorsports teammate Alex Bowman with four laps remaining Saturday in the first race of a weekend doubleheader at Pocono Raceway.

But fate and the Tricky Triangle had other ideas. Coming out of Turn 2, Larson’s left front tire went flat, and seconds later his No. 5 Chevrolet was crashing into the Turn 3 outside wall, allowing Bowman to drive by for his third victory of the season.

Bowman, who recently signed a two-year contract extension at Hendrick, took his turn to keep the team’s hot streak alive.

Larson said he might have run over debris to cause the tire issue. Bowman was in the right spot to take advantage and win for the third time in his last 10 races.

“Our car was so good earlier in the race and I really felt like we had something to work with, but we fired off too tight on old tires, and at the end that hurt us,” said Briscoe. “We’ve definitely got something we can build on for tomorrow, and we’ll give it another shot at putting the HighPoint.com/Webex by Cisco Mustang in the top-10.”

The first caution of the race occurred on lap 10 with Briscoe riding in the 25th position. He radioed to the HighPoint.com/Webex by Cisco team that he was barely slipping the back end of the car on entry into turn one. The team pitted for four tires, fuel, and an air pressure adjustment, and Briscoe restarted 29th on lap 12.

Briscoe ran as high as 21st but ultimately finished the first stage 24th, reporting that his Ford Mustang was tight off the corner. The team elected to stay out at the stage break to gain track position when the leaders pitted.

In Stage 2 of the race, Briscoe started 13th and finished 15th. After 16 green-flag laps, Briscoe said his Ford machine started the run loose but had tightened up and was good on entry.

When the caution flag waved on lap 54, he asked for a slight adjustment to help the front end turn. He noted his HighPoint.com/Webex by Cisco Mustang was really good and he didn’t want to change the handling too much. The team gave him four tires, fuel, and a small chassis adjustment on lap 55, and he restarted in the 24th position on lap 58.

Briscoe raced his way up to the 14th spot before the lap-73 caution. He told the No. 14 team his balance was great as he pitted for fresh tires and fuel, restarting 15th on lap 76.

At the conclusion of the second stage, Briscoe crossed the line 15th and remained on track to line up 16th for the beginning of the final stage.

On lap 93, the HighPoint.com/Webex by Cisco driver gave up the 11th position to make a scheduled green-flag pit stop for right-side tires, fuel, and a slight air pressure adjustment to give his Mustang more rear grip. He returned to the track in the 29th position as stops continued to cycle.

Once stops cycled through Briscoe was running 11th on lap 111, but he began to fall back, reporting his HighPoint.com/Webex by Cisco Ford had become way too tight. He was able to change his line to help with handling as the laps began to wind down, but it was too late to make up ground and the No. 14 crossed the line in 24th place.