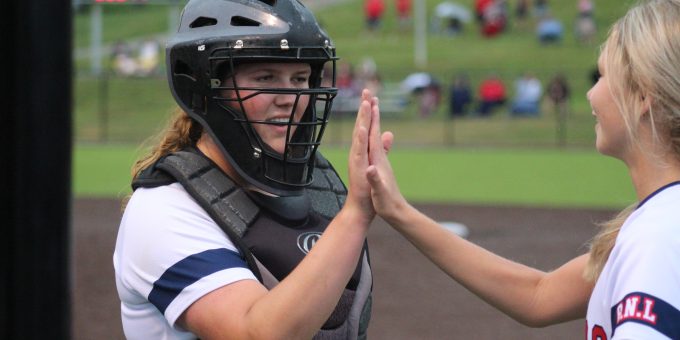 BEDFORD – With a Class 4A semistate appearance looming, the first priority before Bedford North Lawrence’s practice session, even in the pouring rain, was determining just how far Sarah Stone’s mammoth blast – the gigantic grand slam that powered the Stars to a regional championship – actually traveled.

After reviewing multiple video views, after pinpointing a landing location (which needs to be honored with a permanent marker in the ground for future reference), BNL coach Brad Gilbert climbed the hill with a tape measure. Curiosity was killing him.

His unofficial declaration? “266 feet,” he said. “But that doesn’t take into consideration the slope of the hill.” So it’s likely the mathematical geniuses can calculate a better distance, using arc, angles and other equations, to come up with a distance in comparison to the level of the outfield fence. Probably closer to the 275-plus range.

Two days later, it’s still a “wow” moment that will live in infamy, and probably grow in stature over time. The reactions – from Gibson Southern pitcher Olivia Stunkel’s refusal to turn around and watch that ball scream into the night, to the frozen position of her center fielder as that blast rocketed over her head, to the fans stationed on the hill as they looked up and back in wonderment while that bomb whistled past – were priceless.

The only number that really mattered? The 4 runs that legendary homer drove home as BNL won the regional and advanced to the two-game semistate at Center Grove on Saturday.

BNL is chasing its first semistate title, making its first deep dive into the state tournament series since 1997. After three wins, including two tough ones for the two trophies the Stars have secured, the Stars are supremely confident and riding a crest of momentum.

”The next two teams are tough,” BNL sophomore pitcher Annie Waggoner said. “But if we keep playing like we’re playing, keep the bat on the ball, we’ll be fine.”

The Marauders (22-5) will present the next obstacle, and they’re formidable, with four players sporting batting averages over .400, with a dynamic offense averaging over 10 runs over game, with an ace pitcher boasting a minuscule 0.61 ERA. Of course, at this point, everyone is that good.

“They’re like everyone else we’ve seen at this level,” Gilbert said. “They have four or five really good hitters, the pitching is really good, they’ll play good defense. We’ll have to figure it out, find a way to score some runs. Everyone we play from here on out will be playing their best softball. We just have to play our game, which is great pitching and great defense.”

BNL’s offense is anchored by Stone, the Kentucky recruit and Miss Softball candidate who is hitting .553 with 17 home runs (with the blow that would have been out of almost every park, including those cared for by the U.S. Parks Service) and 49 RBIs. She gets plenty of support from Waggoner (.406, 8 HRs, 35 RBIs), Braxton McCauley (.433, 41 RBIs) and lead-off hitter Lauryn Anderson (.408).

“We scored a lot of runs early, but we obviously weren’t playing the competition,” Gilbert said. “Was Tuesday our best game offensively? Probably not, with only two hits. But there are games you have to find a way to win, and we did a good job. We had one walk and no errors, so we won those categories. The only thing they keep track of on the scoreboard are runs.

“Our confidence is really high, our kids believe in each other. We know we’ll figure out a way to attack pitchers. So we’re playing good softball.”

Waggoner has been spectacular in the circle, with a 20-1 record and 1.80 ERA.

If the Stars can conquer the Marauders in the opener, they’ll face a rematch in the final. BNL edged Columbus North 7-6 on April 17 and fell to Roncalli 4-1 on May 15. That was BNL’s last loss.

“I’d rather play first, you know exactly what you have,” Gilbert said. “Our plan is to win Game 1 and get ready. Game 2 will be teams we’ve already seen, so I like the draw. As long as we score one more run than Mt. Vernon.”

“I expect us to win, obviously,” BNL senior Brynlea Bennett said. “If we play our game, we’re pretty unbeatable.”

Roncalli vs. Columbus North: The Royals have the best pitcher in the state, perhaps in the nation, in sophomore fireballer Keegan Rothrock, who owns a 21-2 record and sparkling 0.15 ERA with her 70-plus mph fastball accounting for a whopping 309 strikeouts. Those are Nolan Ryan numbers.

Rothrock also does damage at the plate, hitting .434. Roncalli’s offense, not as prolific as others in the semistate, features sophomore Lyla Blackwell (.469), junior Kylie Freire (.377 with 31 RBIs) and senior Chloe Parks (.432).

The semistate champion will advanced to the state final at Center Grove on June 11-12. Days and times for the final in all four classes will be announced.