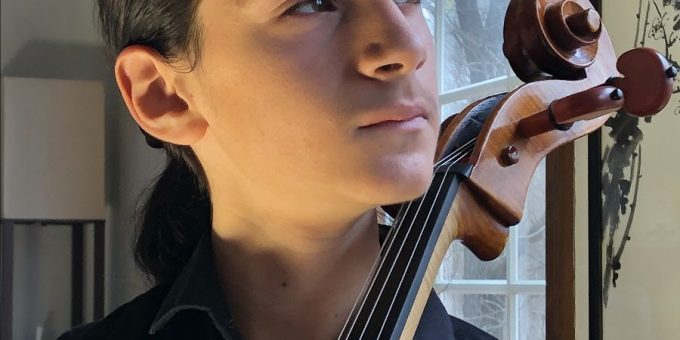 Kalinovsky won the 12-to-14-year-old division. He earned a scholarship to Philadelphia International Music intensive classical musical training program this summer. He will also take the stage this fall in the PIMF Winners Circle Concert with several members of the Philadelphia Orchestra.

Last year he was first runner up.

Serge competed playing the last movement of Edward Elgar’s Cello Concerto, a piece he says he “wanted to explore for its wondrous capacity for emotional depth.” The somber work is considered a cornerstone of the solo cello repertoire, composed by Elgar in the aftermath of the First World War.

Kalinovsky has been refining his craft for a decade.

“I initially chose cello over violin at age 4 after hearing British cellist Colin Carr’s performance at the Heifetz Institute where my father was teaching, and because the idea of sitting down while playing was very important to me,” he said.

Kalinovsky studies cello with Susan Moses, formerly of the Indiana University String Academy, and hopes to someday be a part of a major string quartet or orchestra.