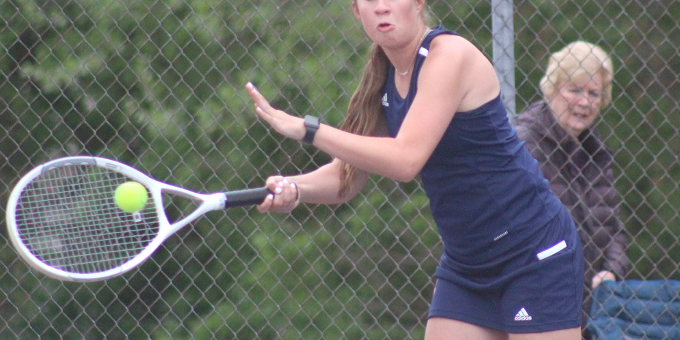 SEYMOUR – Seymour swept the singles while topping Bedford North Lawrence 4-1 in the first round of the Hoosier Hills Conference tournament on Monday.

BNL (6-7) won at No.1 doubles while falling into the consolation bracket.

Bella Stigall and Mallory Pride, now 13-1 as a tandem, recorded a gutsy win at No.1 doubles, prevailing in a three-set battle with Avery Ragon and Mallory Moore. The Stars won the final two sets with late service breaks for a 3-6, 7-5, 7-5 triumph.

“They played the match of the year for them,” BNL coach Joni Stigall said. “Seymour is more than strong, they have two seniors who have played together their entire careers. Our girls just played their tails off. They were able to find a way to beat that team. It says a lot when the opposing coach says they are the best team they’ve gone against.

“As anxious, angry and frustrated as these two make me at times, they are just darn good and fun to watch. I’m super proud of them.”

“Our singles were just outmatched,” Stigall said. “They all hit really well and are just really good players. Our No.2 doubles played well but not as good as they have before. They had some baseline and net struggles. It just wasn’t their night.”