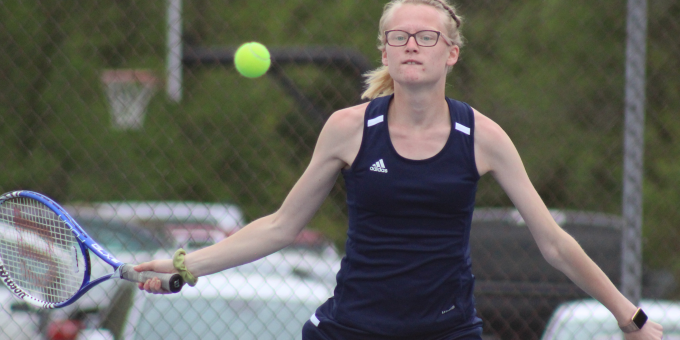 BEDFORD – Emily Duncan’s strategy, in a sport that rewards power and speed, is so simple. Nothing fancy, certainly not impressive. Just make them hit it one more time.

Amazing how it works so well. Eventually, whether because of fatigue or frustration, the opponent will make the mistake. So don’t mistake Duncan’s frail build for fragility. Mentally, she’s tough.

Duncan’s backboard game was on display on Thursday afternoon as Bedford North Lawrence celebrated her senior night with a 4-1 victory over Edgewood. Duncan, the lone upperclassman honored, recorded a straight-set win at No.2 singles while leading the Stars to another win that – like the cake she got to cut afterward – was a lot of icing.

BNL coach Joni Stigall didn’t expect many victories this season, wasn’t counting on Duncan to make an impact when the year began. Yet here the Stars are at 6-6, and Duncan has been the leader and fixture for some overachievement.

“She’s just consistent,” Stigall said. “A lot of time she’s playing better players, but she’s not going to go after silly shots. She makes sure she gets that ball over one more time. And everything we tell her to do, she listens.

“That’s what has put her here. Because I never would have dreamed she would play varsity. When she first started as a freshman, she was just here for the party. She’s not super aggressive, not a great athlete. But she came out here and did her job. Without her, we’d be hurting.”

Duncan rolled past Edgewood’s Stevie Farley 6-2, 6-0, in typical fashion. Most of her wins, the opponents leaves the asphalt court wondering what just happened.

“That’s the best thing, to get in their head,” Duncan said. “Once you figure out how to do that, that’s the winner.”

Duncan figured it out. Her game is all footwork and a defensive posture, about solid strokes without generating ball speed. That attack fits her perfectly.

“I had a goal in mind,” she said. “I wanted to be varsity for senior year. I just worked hard until I got there. It’s all about moving your feet, and that’s the hardest part to learn.

“It’s really rewarding, considering the season hasn’t been the best for me. But I just wanted to give my all tonight. We’re so young. I wanted to be the leader I had to be, and what we needed.”

That facet of her game surprised Stigall more than anything. After missing last season when the virus forced cancellations of all spring sports, Stigall didn’t know what she had, both in terms of court talent and leadership skills.

“I didn’t know that we had a leader,” Stigall said. “But Emily completely led the team in everything. She knew her role.”

The Stars (6-6) swept the doubles against the Mustangs. Mallory Pride and Bella Stigall clubbed Caroline Chandler and Kaiden Harrington 6-3, 6-2 at No.1, while Kenley Craig and Izzy Alldredge swept past Jenna Pace and Katie Stephens 6-0, 6-0 at No.2.

Becca Epping scored the final point for BNL with a 6-1, 6-4 triumph over Keelyn Tiller at No.3 singles.

“Every win has been really good for us,” Stigall said. “It’s another win to be happy about.”

BNL will visit Seymour for the first round of the Hoosier Hills Conference tournament on Monday.