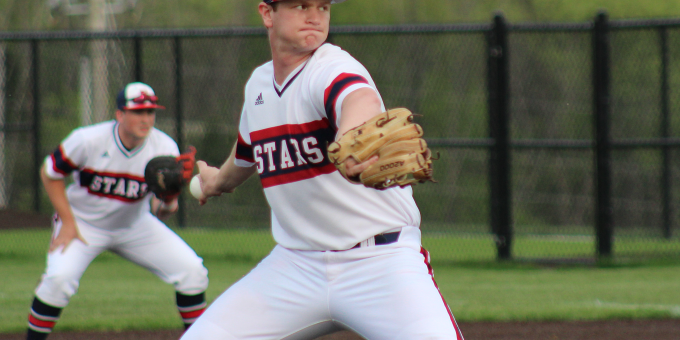 When BNL’s Cole Karr missed his spot, he paid the asking price. Two balls, caught in the jet stream over refurbished BNL Field, sailed over the fence in center field. Get ‘em high, watch ‘em fly.

From that early scuffling, after allowing home runs in the first two innings, Karr found his prime spot and went to work, firing a complete game on Tuesday as the Stars conquered Columbus East 4-3 in what could be a preview of a potential clash in the upcoming Hoosier Hills Conference tournament.

BNL (10-3) scored the winning run, without the benefit of a base hit, in the bottom of the sixth, and Karr capped his working man’s performance by getting a snazzy double play for the final outs. He fanned five while improving to 3-1.

The Olympians (6-5-1) went deep for early power production. Parker Harrison hammered a solo shot in the first, and Clayton Taylor led off the second with another solo blast. From that point, Karr kept the ball in the park and East at bay.

“In the beginning, I missed my spots,” Karr said. “I left them up a little more over the plate than I should have, and those two are not the guys to do that. Once I got my location down, I could keep them where my outfielders could get them.”

BNL capitalized on East mistakes for its runs. In the first, the Stars scored three times, set up when Evan Waggoner’s liner to left was misplayed. Whitt Callahan cracked a two-run double and Karr added a RBI single.

East pulled even in the sixth. Will Rieckers ripped a double over third base and down the left-field line, and Kaden Wise singled to right for a 3-3 deadlock.

In the bottom of the sixth, BNL built its threat on walks to Ryker Hughes, Konley Woodward and Aden Pemberton. Hughes scampered home with the go-ahead run on a wild pitch.

“That’s a good win,” BNL coach Jeff Callahan said. “It was good to win another close game, make some big plays. We did enough to win the game, and our pitching and defense was outstanding.”

Karr, with his curve ball keeping East off balance, scattered seven hits, and his defense turned two double plays, including the sharp 5-4-3 to end it.

“We don’t have pitchers to blow people away, so we have to pitch to contact,” Callahan said. “Unfortunately he got a couple up and they hit them hard. But if you pitch and play defense, you give yourself a chance every night.”

Colton Brown and Karr both had two hits for BNL, which won a statement game. The Stars will be a factor in the HHC tournament.

Rieckers had two hits for East.

The Stars will host Martinsville on Friday.