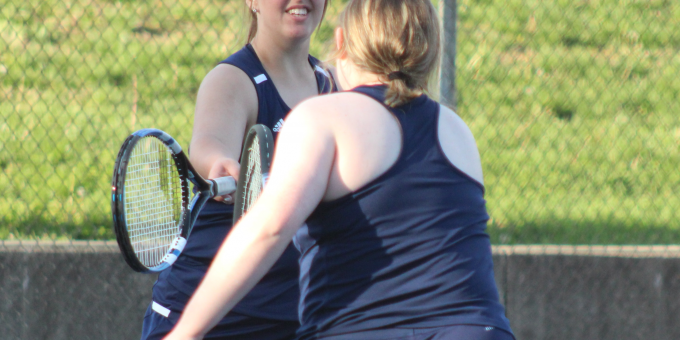 The Stars have solidified doubles, and they swept those courts with impressive wins against Loogootee on Monday afternoon. But the Lions returned the favor on the other three courts, taking the singles for a 3-2 team triumph.

BNL (1-4) doesn’t have that far to go, certainly not a thousand miles, especially considering how far this young squad (three freshmen and two sophomores currently grace the lineup) has already come. Just a few more steps.

“We have to pick up wins in singles, somehow,” BNL coach Joni Stigall said,. “We’re working some things out and we might try something a little different and see what happens. I have to figure something out.”

BNL, if results and progress count as accurate measurements, has figured out the doubles. Bella Stigall and Mallory Pride improved to 5-1 as a tandem with a 6-2, 6-2 victory over Katie Callison and Caitlin Carrico at No.1.

“I don’t give them enough credit because they’re a really good team,” Stigall said, admitting – as so many coaches discover when dealing with children on their roster – that family ties tend to sharpen criticism. “I tend to focus on the negative too much, because it’s my kid and my niece. I’m ready to kill them most of the time, but they’re a good team and they can get it done.“

BNL’s freshman duo of Kenley Craig and Isabelle Alldredge continued their rapid rise in competitive form, powering their way to a 6-4, 6-3 win over Grace Foddrill and Madison McAtee at No.2.

“We worked on things the last three days, and they were like a different team,” Stigall said, heaping credit on assistant coaches Cody East, Dave Graham, Dave Adams and Jason Stigall for their patient work. “They would have lost that match last week, and now they’ve taken everything we’ve said and did it. It’s helping us tremendously.”

Craig pointed to the mental approach as a key stepping stone.

“It’s mainly keeping each other up,” she said. “We never let a bad point get to us. I always get down on myself, so I’ve learned to keep my head up. That makes us play a lot better.

“We work on a lot of volleys because we have a lot of net play. That’s really helped us. It’s taken some time, but we’re finding each other’s groove and getting it going.”

The Stars will host Linton on Tuesday.