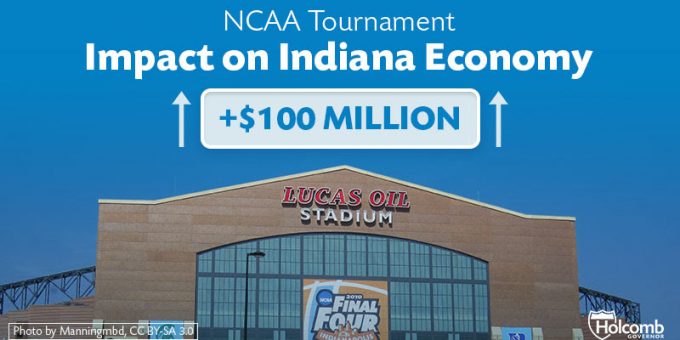 UNDATED – The madness is over, the confetti has fallen, and the 2021 NCAA tournament is officially in the books.

This was the first time in history that a single state hosted all 67 games and all 2,500+ student-athletes of March Madness.

Governor Holcomb expressed his gratitude for the thousands of workers and volunteers who stepped up to make this year’s tournament the incredible success that it was.

But the action and excitement wasn’t just confined to the hardwood.

Hosting the tournament provided a major boost to Indiana’s rapidly recovering economy and this couldn’t have come at a better time for the hundreds of restaurants, bars, hotels, and venues that benefited directly from the influx of media and fans that came to cheer on their favorite schools.

Indianapolis hotels were at 96  capacity occupancy – the highest in the nation – during the tournament.

The numbers are continuing to pour in, but here’s what officials know so far:

As Indiana enter into the fourth quarter of the pandemic, Governor Holcomb will continue working towards rebuilding Indiana’s economy by bringing in more out of state investment and expanding on the success of Indiana’s Next Level Jobs Program which provides Hoosiers with the skills and opportunities they need to succeed in today’s competitive job market.