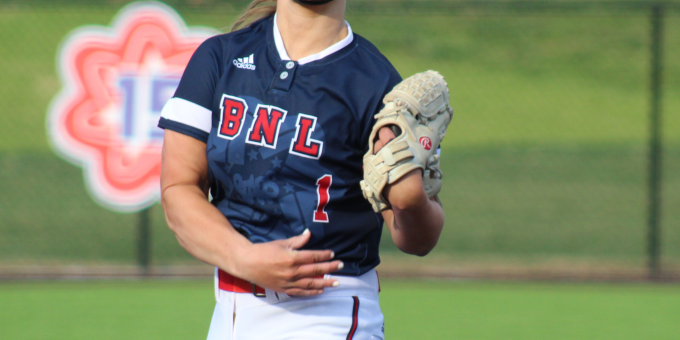 BEDFORD – With one swing, Bedford North Lawrence’s Sarah Stone – the Sultana of Swat – did all the necessary damage. Annie Waggoner, the other half of BNL’s dynamic battery, did the rest.

Stone’s first-inning home run provided the offensive jolt, and Waggoner drained all of Brownstown’s energy, firing a four-hitter as the Stars – newly minted at No.8 in the latest Class 4A poll – bounced the Braves 5-0 on Monday afternoon.

Brownstown veteran coach Monte Ault had BNL’s dangerous catcher-pitcher combination circled in red ink on his scouting report. The thought was obvious: Don’t let them beat you. He could do something about Stone, walking her twice intentionally after her blast. But his offense could do little about Waggoner.

After surrendering a double to start the game, Waggoner (6-0) allowed only one other runner to reach second base. She fanned six, and her defense was flawless behind her as her earned run average dipped to a minuscule 0.42.

“Looking at the last two years, the big question mark on everyone’s mind was would we have the pitching,” BNL coach Brad Gilbert said. “I would just smile when people would say that. I knew what we had.”

The Stars (7-0) struck early with Waggoner’s one-out double to center and Stone’s bomb to right (her sixth of the season and BNL’s 14th overall). The next two times at the plate, Stone was paid the ultimate in respect. She’s now drawn four intentional walks this year (including one with the bases loaded) and will likely see more of that as opponents see the Kentucky recruit’s preposterous .800 batting average.

“Rightfully so, especially after she hits a home run,” Gilbert said. “I would, absolutely. In certain situations, why not? That’s going to happen. Teams are going to get smart. When they walk her, we have to drive her in.”

BNL did that during its 3-run third. With one out, Carlee Kern and Waggoner singled, and Stone was issued the free pass to load the bases. Kern scored on a wild pitch, Waggoner scampered home on Braxton McCauley’s ground out, and Brynlea Bennett cracked a double to left to chase home the final run.

“That’s what we need,” Gilbert said. “She will get frustrated, so we have to make sure we make them pay. We need to make them pay – not anything extra, just hit the ball in the gap.”

BNL had other threats, but the Braves cut down runners at home (in the second) and third (in the fifth).

“We ran ourselves out of some runs, but that’s stuff we can clean up and work on,” Gilbert said. “I’d like to see us not leave a couple of runs out there, but the one thing is we were aggressive. I’d rather be aggressive and make mistakes. We tried to test them a little too much.

“I knew they would be solid. They’re well coached. We knew it would be a good challenge, it wouldn’t be easy.”

Waggoner made it look easy. Erin Singleton clubbed the first double on the second pitch of the contest, and Emily Singleton had a double in the third. Nothing else was hit with much authority.

“We knew their pitching was good,” Ault said. “We played them pretty well. They’ll be one of the better teams we play.”

BNL was limited to season lows of 5 hits and 5 runs.

The Stars, who have played only once on the road, will have some time off to refocus before visiting Linton to start a week away from their new turf home on Monday.