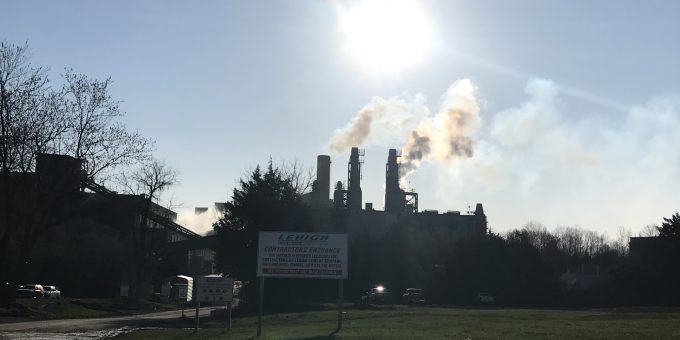 On Thursday, Braun stopped at five locations which included Lawrence County’s Lehigh Cement construction project, Monroe County visiting Catalent, learning how the Bloomington facility who is assisting the fight against COVID-19, Bartholomew County’s Toyota Materials Handling plant which has created jobs for Hoosiers over the last 30 years, the Brown County Music Center in Nashville which is served as a vaccination site, and made a final stop at Schneck Hospital in Jackson County to learn how they are serving Jackson and surrounding counties as a health care provider.

Braun’s priority was to get out of Washington D.C. and try to reach all of Indiana’s 92 counties with the focus on issues that affect Hoosiers. This tour’s primary destinations were centered around health care locations, the hospitality industry, and certain businesses to learn how they have been impacted by COVID-19.

Following the tour of the Lehigh Plant, Senator Braun talked to Times Mail reporter Carol Johnson and WBIW’s reporter Bill Raines about a variety of topics.

Braun told reporters what the Lehigh expansion really means to the community and their efforts to be a more environmentally friendly company that will help shape the future of Mitchell.

“Any community that has a leading-edge facility like this, this plant will be reducing CO2 emissions over the current production methods. That is saying a lot, that will be increasingly more important over time,” said Braun.

Braun went on to discuss the concerns of both residents and communities throughout the state as he visits the 92 counties across the state.

“They are anxious to get back to a protocol that is Pre-COVID. My observation is from downtown Jasper, my wife had a business for 43 years this September, and visiting companies including here (Lehigh) they have been very diligent with so few incidents because its in any company’s best interest to keep their employees and customers safe,” said Braun.

When asked about Governor Eric Holcomb’s mask advisory that will go into effect next week he talked about the individual responsibility in deciding what is safe for them.

“Let’s respect the disease, but this boils down to an individual responsibility on this,” said Braun.

Braun was asked about whether the Mid-States Corridor is still on track.

“The route should still be announced this fall, I do not have an inside track of what path the corridor will take. What people do not know, this is a long-term project and mostly to build a by-pass around Huntingburg, and Jasper. If you have been around Jasper or Huntingburg you will find that this area is congested and this will help with that,” said Senator Braun.

“The corridor will then try to access Interstate -69 whether that will be connecting it to State Road 37, or by using U.S. 231 or another path has not yet been decided, but will bring growth and economic development to the area,” he added.

National issues were also discussed during the brief question and answer session that included the crisis at the border.

Braun was one of nineteen Senators who toured the border that has overwhelmed the immigration system and overcrowded facilities.

“The long-term fix for immigration has to be a secured bordered,” said Braun.

There were more than 18,000 unaccompanied minors in either Border Protection or Health and Human Services as of last Thursday.

“Republicans and Democrats are going have to work together on this issue,” Braun continued.

Biden’s new infrastructure plan was another topic that Braun touched on as he was asked about Biden’s proposal on the country’s infrastructure.

“I have just seen a report today, that only 40 percent is really infrastructure, which is roads, and bridges. The rest is very similar to what the COVID relief bill was,” said Braun.

“By the way we are borrowing every penny of it,” said Braun.

Braun noted it was good to be in Mitchell and see commerce in play and the way the real world works.

“It was great for Senator Braun taking his time and meeting with us. We appreciate him visiting our facility,” said Tracy Crowther plant manager of the Lehigh plant.