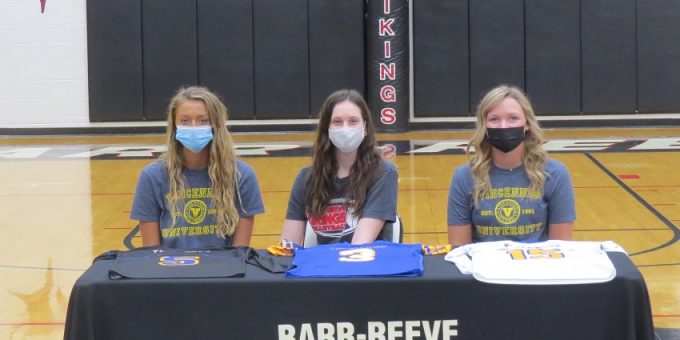 MONTGOMERY – The Vincennes University volleyball team made a big splash with the addition of three two-time Indiana state champions to their recruiting class with the additions of Hannah Graber, Maranda Wagler, and Addison Ainscough from nearby Barr-Reeve High School.

“We’ve always targeted the high-level student-athletes in the area, I feel like that is important because we have to show the area that we have a great program at VU,” VUVB head coach Gary Sien said. “I just want to make sure everyone in the area knows we’re an excellent option academically as well as athletically at Vincennes.”

“We do recruit high-level students and we’ve done pretty well with that, with our five Academic All-Americans last year. These three are right there with being the most decorated athletes in Barr-Reeve history but they are very serious students too and that’s exactly the type of student-athletes we want.”

“We also like to recruit athletes that come from winning programs, with long traditions of winning,” Sien added. “These three have two of the three state championships in this school’s history, so they don’t know anything but winning and that’s a mentality that cannot be coached. If that’s the mentality they have coming in, half the battle is already won.”

Hannah Graber finished her Viking volleyball career with 998 set assists and 187 digs in her senior season. Graber was also named to the All Blue Chip Conference, All-District and All-Area teams all four years of her high school career.

“I chose to sign with Vincennes University because they have a great program and it’s close to home,” Graber said.

“Hannah is a natural leader on the floor,” Barr-Reeve volleyball head coach Amber DeCoursey said. “Not only is she an outstanding setter, she also has excellent court awareness.”

“Hannah plays with an edge,” Sien added. “She demonstrates very good leadership abilities that goes well in the setting position. We like how she runs the offense and has a great understanding of the game. Hannah has a strong front row game as well and can both set and hit.”

“I chose Vincennes University because I wanted to stay close to home,” Ainscough said. “They have a great program and I wanted my grandparents to be able to come and watch me play.”

“Addison is as athletic as they come,” DeCoursey said. “She has the ability to play anywhere on the court and is just as good defensively as she is offensively.”

“Addison is one of the best all-around players we have seen in the area,” Sien said. “Though a middle blocker by trade, she can do just well at either pins. We see her as a six rotation hitter for us as she possesses exceptional first contact and serving skills.”

Miranda Wagler is coming off a stellar senior season as well, finishing with 129 kills, 59 digs and 26 service aces.

“I chose VU because it’s close to home, so my parents and siblings can come and watch me play and Vincennes is a great program,” Wagler said.

Wagler was the recipient of the 2020 Mental Attitude Award as well as being named Second-Team All-Area and IHSVCA Academic All-State.

“Maranda is a dream teammate,” DeCoursey said. “You know you are always going to get 110-percent from her. She has the ability to swing from any position on the floor and her work ethic is contagious.”

“Maranda can play any of the three row positions and has a good armswing,” Sien said. “She can serve and play back row well, we see her as a player with the potential to further her all-around game in our program.”

The Vincennes University Athletic Department welcomes Hannah Graber, Addison Ainscough and Maranda Wagler to the 2021 recruiting class and wishes them well as they finish their senior year this spring.