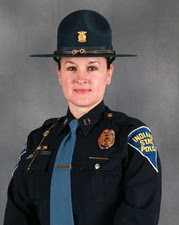 (MORGAN CO.) – The Superintendent of the Indiana State Police, Douglas G. Carter, has announced the promotion of Captain Dana M. Harshman to the rank of major.

Harshman, who is originally from Indianapolis, Indiana, is a 1994 graduate of Perry Meridian High School, and in 1999, she earned her bachelor’s degree in education from Indiana University.

In the fall of 2002, she was selected as a counselor for the 63rd recruit academy. After eight years of patrolling Marion County, Harshman was promoted to sergeant and became the supervisor of the Marion County eastside afternoon shift.

Harshman joined the executive security detail in 2013 and worked there until she returned to the Indianapolis District as the assistant district commander in 2014.

In 2017, Harshman was promoted to the rank of captain, and she served as the assistant commander of the Training Division until this recent promotion.

Harshman currently resides in Morgan County with her husband and two children.