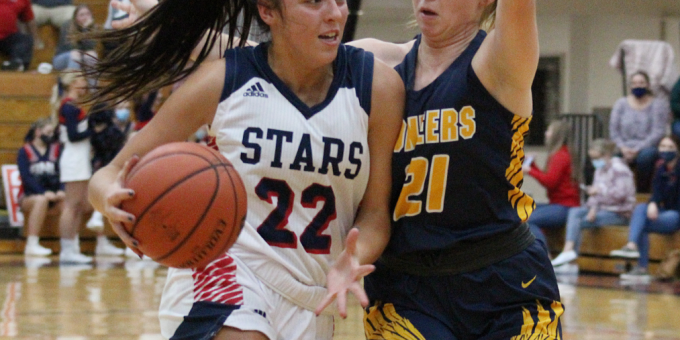 BEDFORD – The year 2021, in Chinese astrology, is the Year of the Ox, representing stability and calmness. After the most turbulent, stormy, anxious season in Indiana girls basketball history, everyone could use a good ox to pull the wagon forward.

In the midst of all the madness, with a virus pandemic casting its heavy shroud over every facet of the game, on the court and off, Bedford North Lawrence basketball was the sanctuary of sanity. The Stars could be depended on, to play with ferocity, to win with grace, to compete for grand prizes. BNL represented a safe haven from the swirling social and medicinal mayhem. Even from afar, with most pushed back to that safe distance, the Stars were still loved. And they deserved it.

The whirlwind 2020-21 campaign ended with great disappointment, a loss in the regional championship that was a mild upset but supremely upsetting. The Stars, seemingly destined for something magnificent, came up just short of their ultimate goal. How they got close at all was something special.

BNL, ranked No.3 in the final state poll, concluded with a 22-3 record. Each loss was a single-possession setback. The Stars, with six seniors leading the way, won their 10th consecutive sectional title. They were completely unprepared for the sudden conclusion, the 51-48 defeat against No.7 Franklin that lowered the curtain.

“We just didn’t want it to end. It was heartbreaking,” BNL coach Jeff Allen said. “We had so much fun. We work hard, but we have fun. With these kids, we battled. We played hard, and we played the style of basketball people enjoyed, even though a lot of people didn’t get to watch a lot of it. I liked our determination and fight.”

From the rearranged season opener with Class A No.1 Lanesville, from a victory over state power and eventual Class 4A No.1 North Central that announced BNL as a legitimate title contender, to impressive victories over Class 2A No.1 Linton and 3A No.1 Silver Creek, through a gutsy win over Jennings County in the sectional final, the Stars were exciting, stimulating, inspiring.

The stars for the Stars were many. They lacked size but not heart. Freshman sensation Chloe Spreen finished as the team leader in scoring (14.8) and rebounding (5.5), sophomore point guard Karsyn Norman was the unofficial MVP of the sectional, but this team revolved around its seniors.

“For me, and it’s every year with the senior class, but this class was pretty special,” Allen said. “They really matured, and how much they improved since they came into high school, and the fun we had, the singing on the bus rides. To be 22-3 and have the fun we had, I’m very happy.”

McKnight, now bound for Saint Francis, became the eighth player in program history to reach 1,000 career points, and she finished fifth on that list with 1,208. Gomez, on her way to Lindsey Wilson, scored 726 points in three seasons.

“Both Chloe and Irye, and I told them after the Jennings County game, in the second half of that game those kids just refused to lose,” Allen said. “That was how far they had come and how much they had grown, from an emotional and mental standpoint, understanding what’s important.

“It will make them successful in basketball going forward and in life. For me, that’s why I do this, to watch kids develop and grow to become great people. I’m going to miss them terribly.”

Louden, who signed with Franklin College, was a pleasant surprise, with her transformation to a dependable ballhandler, to a Gorilla Glue defender, to her cemented status in the starting lineup. She had to earn that.

“Madisyn Bailey and Emma Brown (standouts on the junior varsity) would be starting varsity on any other team,” Allen said. “They‘re high level guards, and Jenna, as the year went on with her play, there was no way those kids were going to play in front of her. She was outstanding. She just really surprised me with her senior year, and I was so proud of her.

“Haley had big moments. Makena’s play off the bench was outstanding. It seemed like every time I put her in there, she did something good and just solid, reliable. And Grace is a great kid that wanted to be involved with the team. She was a great teammate. Those six seniors were not only great basketball players, but great teammates. That makes my job easy.”

The only thing that escaped the Stars, who switched styles to an aggressive, up-tempo attack, was postseason glory. The 10th straight sectional crown was sweet, especially the way it was won with a second-half comeback, but the Stars were dreaming of a banner to add to the collection in the northeast corner of BNL Fieldhouse. Fate can be cruel.

“That’s the way seasons are going to end,” Allen said. “You’re either going to come out on cloud nine, or you’re sad because it’s over, you feel like you lacked to accomplish what you wanted.

“You have to call it a successful year. We had a couple of goals we highlighted. For whatever reason, I don’t know we were playing at our absolute best here at the end. In spurts, we were really good, but not consistently over a whole game. That has to fall on me. I have to look and see if there’s something I could have done to elevate our play.

“What a strange year, with all the starting and stopping. There was a lack of fans, and that’s a big deal. We hadn’t played in front of a crowd like Saturday night all year long. Typically we would. I thought our kids were unsettled and never seemed to get confident. We couldn’t get relaxed.”

BNL has now won 20-plus games in five straight seasons. This one was hard because of the surrounding circumstances, with a mid-season shutdown and constant schedule adjustments, yet easy because of the talent and passion.

“We had tremendous girls,” Allen said. “That’s a tribute to the families in this community, and the school. It’s easy to coach great kids.”