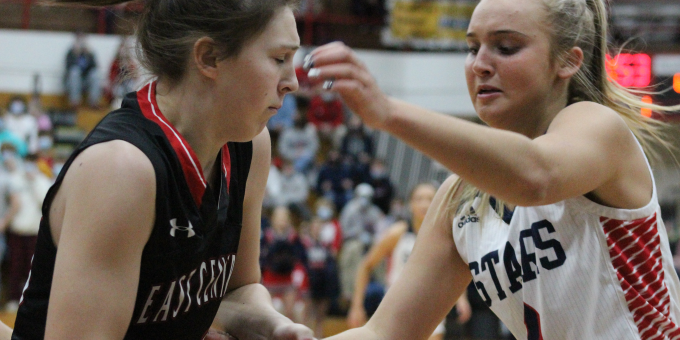 BEDFORD – Bedford North Lawrence coach Jeff Allen wiped the strain from his eyes, blurred by what he just had to endure. After the wild, tense conclusion to the opening game of BNL’s Class 4A regional defense, who wouldn’t? East Central caused a lot of headaches.

The cure to the throbbing migraine was victory, and the No.3 Stars escaped with that, fending off a furious late rally for a 51-50 triumph in the morning semifinal on Saturday.

BNL will meet No.7 Franklin, a 51-44 winner over Castle in the second semifinal, in the championship.

Chloe Spreen scored 20 points and BNL (22-2) hit important free throws in the final 90 seconds while a 13-point lead quickly evaporated. That’s what led to the call for aspirin. But when the smoke cleared from another classic duel, BNL was headed for the final while the hard-luck Trojans (19-5) headed home again, the victims of another BNL defeat.

BNL got to the next round with a hold-your-breath finish. After a four-minute burst to a 44-31 lead with 4:03 left, after Chloe McKnight converted two free throws for a 50-40 advantage with 1:20 remaining, No.9 East Central made a spectacular move, fighting within a single possession with full-court pressure and a tentative BNL response to the attack. Karsyn Norman’s free throw with 12 seconds left was the ultimate difference.

“To me, in the back of my mind, when we were up 13, it was not enough,” Allen said. “Because they’re good and good teams make run. Luckily we came out on top.”

The frantic final quarter played out in two distinct chapters. The first was the first four minutes, as BNL roared to its double-digit lead with a 9-0 run. Irye Gomez buried a corner trey, Spreen dashed to the basket for a layup, and Spreen drove the baseline for another bucket and the 44-31 lead. Spreen made two free throws at 3:23 to make it 46-33.

BNL was guilty of its fourth turnover during the East Central rally, and that set up Trabel for a 6-footer in the lane. Norman was fouled, and she made the first one, missed the second. Trabel ripped a long trey from the key, but time ran out on the Trojans’ miracle.

“We had a great run to get up 13,” Allen said. “We didn’t take care of the basketball at the end, but they’re good. We would have done the same thing to them. We would have been after them tooth and nail if the roles were switched. Two good teams going at it.

“We made some really good plays when we got that separation. We got a little tentative and turned it over, but it’s a great win. It’s a great win against a great program. We’re happy to be moving on. We got a little nervous when they came after us, made some not-great decisions. So I’m just happy to get out of here with a win and play again tonight.”

BNL made many early moves, scoring 13 straight points in the first quarter as Spreen went to work on the paint and McKnight buried two from distance. The Trojans teetered under the tension but did not crack, with Trabel hitting a wing 3-pointer and a 10-footer in transition to draw East Central within 24-21 at the half.

East Central drew even at 27-27 in the third with a spurt by Hope Fox, but BNL took over control again with two Norman buckets and a Gomez wing drive. That gave the Stars a 35-51 lead and set the stage for the fingernail finish.

Spreen, the fabulous freshman, was special when BNL needed it. She hit 7 of 11 shots and went head-to-head with Trabel, who also scored 20. That was a duel of possible future All-Stars.

“They were really guarding us at the 3-line, so we had to attack the basket,” Allen said. “Chloe’s really good at that. We had some success with that.

“Trabel was outstanding. She’s just a competitor. She doesn’t stop. In the fourth quarter, when they were down, they were getting her the ball every time and she’s a handful.”

“I’m a little biased but she’s one of the top sophomores in the state,” East Central coach Kevin Moore said. “She has the ‘it’ factor. In big moments, she doesn’t shy away from the limelight.”

Maxwell and Fox added 8 points each for the Trojans, who are now 0-7 against BNL in series history and suffered a regional loss to the Stars for the second straight year. East Central was guilty of 16 turnovers, and that was the fateful stat. That caused a few tears red eyes in that locker room.

“I hate losing, I hate it more than I like winning,” Moore said. “When a game ends in a one-point difference, the end of the game plays always stand out. Maybe we could have changed the course of the game here or there.

”You can’t do that, turn it over, against Bedford, against a team of that quality. If you have a difference of 9 turnovers, that’s nine more shots you’re giving a team that’s really good. They’re regional champs for a reason.”

McKnight finished with 13 points and Norman totaled 11. BNL made a big step toward its 14th regional title.

“I’m really rooting for Coach Allen the rest of the way,” Moore said.

Lauren Klem had 11 points, Scarlett Kimbrell added 10, and Kyra Baker totaled 10 for Franklin. The Cubs hit 9 treys, only the sixth time all season they have been held to single digits in that category.

Natalie Niehaus had 26 points for Castle, which had a 23-19 lead at halftime.