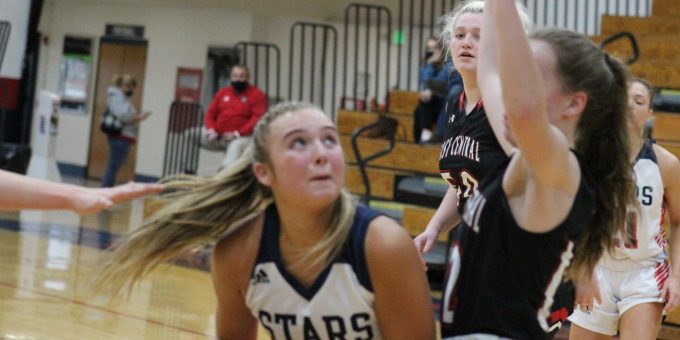 BEDFORD – Few sectional champions survived the death march East Central faced on its way to a title. Three games, against three opponents ranked in the state’s top 30 by the Sagarin computer, foes with a combined record of 43-17.

The reward for such hardy endurance? A rematch with a nemesis.

Bedford North Lawrence has been the immovable object against East Central’s irresistible force, and the third-ranked Stars stand in the way again in the opening game of the Class 4A regional at BNL on Saturday morning. The winner will meet either No.7 Franklin (20-2) or Castle (14-4) in the championship that night.

The Trojans (19-4) have never conquered the Stars in six attempts, and that trend worries BNL coach Jeff Allen. Most ordinary people would derive great confidence from that previous success, including a regular-season triumph over East Central in early January. But this is mid-February, the stakes are incredibly higher, and worst-case scenarios often keep a coach on edge and awake at night.

“The part that worries me, when you continue to have success against someone, it really motivates a team,” Allen said. “My kids understand that. We had the same scenario against Jennings County (in the sectional final), where they played at a really high level, inspired to play against us. This team will be the same way. You have to meet that intensity.”

East Central deserves the utmost respect. The Trojans pushed BNL to the brink during last year’s regional championship clash, with the Stars playing a near-perfect second half to win 54-48. The latest battle did not meet that standard, with the Stars winning an ugly defensive slugfest 36-25.

Since that preview meeting, East Central has been tough to tame, especially in the sectional run. The Trojans conquered Columbus East (the Hoosier Hills Conference champ) in the first round, won a double-overtime war with Martinsville in the semifinal, and avenged a regular-season loss to Columbus North to advance.

“We were in really precarious positions in all three of those games,” East Central coach Kevin Moore said. “So our kids, I don’t worry about them or think we’re out of a game, even as poorly as we play offensively some times. Defensively we always give ourselves a chance, and with our mental fortitude, especially as young as we are.

“It speaks volumes about Kevin’s coaching abilty, because that was a tough draw,” Allen said. “That’s a credit to their kids, to take that tough path, three tough games in a row is difficult to do.”

East Central features some of the same characteristics as Jennings: a powerful force in the paint with sophomore Josie Trabel (16.9 points, 6.8 rebounds), a dangerous perimeter threat in Hope Fox (14.7 points) and a solid supporting cast. The scouting report sounds very familiar.

“They have two really good players, and the kids around them are really good role players,” Allen said. “Trabel is a mismatch problem for us because of her size around the basket, and Fox is someone you don’t want to lose track of around the perimeter.”

Neither team set the world on fire in January. Chloe McKnight had 14 points but missed a handful of layups, Chloe Spreen added 12 points, and the Stars were a miserable 3-of-17 from long range. Yet they won because East Central was just as cold (9 of 32 overall). Trabel had 14 points, but Fox was limited to 2 on 1-of-11 shooting.

Don’t expect that to happen again.

“Last time, I don’t know that either team played very well offensively,” Allen said. “We both struggled to make shots we normally make. I expect a better effort out of them this time.”

“Offensively we were in a rut, so we were not ourselves in that game,” Moore said. “But credit BNL and their ball pressure for taking us out of what we wanted to do. They didn’t shoot the ball particularly well, and I don’t think, on their home floor, they’re going to do that twice. We can’t think we can hold them to 36 points again.

“Hope really beat herself up after that game. She wasn’t her normal athletic self, and we had some not-so-pleasant film sessions. I expect her to have a great game.”

BNL (21-2) will counter with its array of stars. Freshman forward Chloe Spreen leads the team in scoring (14.4) and rebounding (5.6), while Chloe McKnight totals 14.0 points (with 72 treys) and 4.8 boards. Irye Gomez adds 12.2 points. And if BNL had a MVP in the sectional, it was sophomore guard Karsyn Norman, who averaged 17.7 in that tournament.

“Karsyn’s shot selection has gotten better, and she’s had success scoring the basketball, which builds confidence,” Allen said. “It’s raised her level of play, which makes us more dangerous. People know about Chloe Spreen and Chloe McKnight, and they focus on those two. But Karsyn and Irye can hurt you if you don’t pay attention.”

“I’ve been really impressed with Norman of late. She’s phenomenal,” Moore said. “You have to guard the 3-line, especially in transition. You have to find McKnight, you have to keep Gomez and Spreen from attacking the paint. I don’t think either one of us will surprise one another. It will come down to eliminating turnovers, taking every possession like it‘s the most meaningful.”

Both teams have advantages to exploit. For East Central, it’s Trabel in the paint, it’s a defensive toughness that allows only 38.6 points per game. East Central has held 8 opponents under 30.

“Defense has been great, just because of the inconsistencies we have had at the offensive end,” Moore said. “We haven’t shot it as well as we think we can, and teams have limited our ability to get it inside. We have to gut out wins.

“We don’t give up a lot of second-chance points, which is crucial. The offensive rebounds we give up are very minimal. So when you can defend and rebound, you’re going to give yourself a chance in big games. If we can use our size advantage, we have to get the ball inside and get them in foul trouble.“

For BNL, it’s experience and the home-court edge. The Stars are the defending regional champs, and all but Spreen played a key role in that. BNL is also playing at home for the first time since Jan. 9.

“Those kids have been in the situation before, and I think they’ll be ready mentally and prepared to do whatever they need to do,” Allen said. “You saw that in the second half of the sectional final. My kids just refused to lose. Things weren’t going well for them, they were struggling, but they found the will to stand and refuse to lose. It’s the competitiveness where you expect to win. That comes with success.”

East Central has never won a regional crown, compared to BNL’s 13 in program history. The Trojans are hungry.

“Our kids believe we’re capable of that,” Moore said. “It certainly won’t be easy taking it from Bedford. You have to take it from somebody like that. Our kids are prepared for a fight.”

The regional winner will advance to the one-game semistate at either Jeffersonville or Jasper on Feb. 20.

Class 4A at BNL

Last meeting: On Jan 2 at BNL, the Stars won a defensive battle 36-25. Chloe McKnight had 14 points and Chloe Spreen added 12 for BNL. Josie Trabel totaled 14 points for the Trojans.