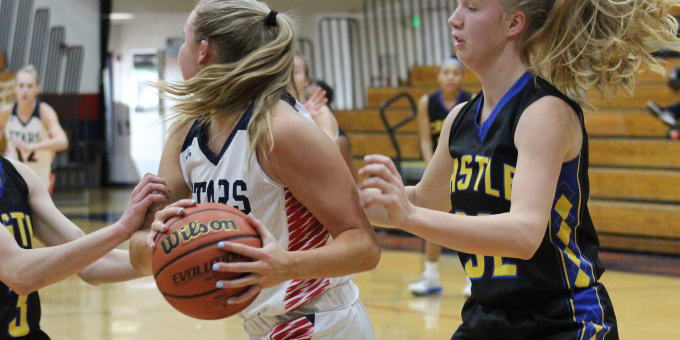 BEDFORD – The numbers are staggering, both in sheer volume and the astounding percentage of success. Keep it up, and Franklin might have to change the name of the town to Trey-ville. The Grizzly Cubs didn’t invent the 3-pointer, but they’re close to perfecting it.

Nobody shoots it like Franklin, the Golden State Warriors of Indiana high school basketball.

The No.7 Grizzly Cubs, who have already shattered state records with their relentless attack from long range, will take their best shot at the Class 4A regional crown on Saturday, facing Castle in the second game at Bedford North Lawrence. That winner will face either No.3 BNL or No.9 East Central in the championship.

Franklin’s offense approaches video-game status. Over 60 percent of its shots come from behind the line. The Cubs made a state-record 20 against Southport on Nov. 10, then beat that with 21 against Batesville on Dec. 30. They’ve been limited to single digits in made treys only five times all season.

“That,” Castle coach Bob Meier said, “is a lot of threes.”

Oh by the way, Franklin (20-2) starts three freshmen. Young, fearless and firing, the Cubs rank sixth in the state in scoring at 66.7 points per game. Like the “official Red Ryder carbine action, 200-shot, range model air rifle with a compass in the stock” BB gun of Christmas Story lore, they’ll shoot your eye out.

”I’m a big believer that your system should fit your players,” Franklin coach Josh Sabol said. “We knew this year we would have a lot of really good shooters. So we made sure we put them in positions to be successful, and it’s worked out well for us.

“For us, we pride ourselves on shooting and taking care of the basketball. If we do those things, we like our chances. You have to play to your strengths.”

On the flip side, Castle’s strength is defense, and that’s where the battle lines will be drawn. The Knights allow only 33.0 points per game (seventh in the state) and have limited five opponents to under 20. It will make for a interesting clash of styles.

So who are these bombers? Franklin features junior Kuryn Brunson, who averages 16.5 points, 5.0 rebounds and 5.1 assists. Then the rookies do their contributing with Scarlett Kimbrell (11.6 points with 75 made treys) and Lauren Klem (11.6 with 82 from deep). They’ve powered the Cubs to their first winning season since 2011-12.

“They’ve been fantastic,” Sabol said of his freshman crew. “This is nothing new for them. They’ve been playing at a pretty high level, they’re used to this type of environment. We knew it would be a long haul, a rebuilding process. Now we’re starting to reap the rewards. Our girls have always expected to win.”

The Knights (14-4) have their own balanced attack with junior Natalie Niehaus (13.8), junior Jordan Coon (9.7) and junior Ky Hay-Swope (8.7). They’ve lost starter Keira Moore to a foot injury, but they still have depth and experience, having won the regional at BNL in 2019.

“We hope it is valuable and can use it as an asset,” Meier said. “Regardless of what grade they’re in, those girls can play. At the end of the day, it doesn’t matter the grade. We’re hoping to find a little bit of comfort in the fact we do have experience.

“But come Saturday, I have a feeling Franklin won’t be worrying too much that they have three freshmen. We have a job to do and it will take a good effort to succeed against a really good team.”

The keys are easily defined. Castle will defend the 3-point line and look to control tempo.

“Hopefully we can do a good job of making sure we find their shooters,” Meier said. “We have to be able to keep the ball in front of us, be smart, try to put as much pressure as we can on them. It’ll be interesting to see if we can make them feel a little uncomfortable and use our speed to our advantage.

“Defense just needs to be, regardless of the team, what you’re consistent at. It takes desire and proper positioning, some willingness to sacrifice. Offense is a much more fine-tuned skill. We’re usually pretty good because we have girls that have bought in, they’re hard-nosed enough to stick their body in the way and endure a little pain for our success.”

Franklin’s success will hinge on its firepower. The Cubs have been held in check by Zionsville (a 51-36 loss) and Center Grove (a 30-29 victory in the regular season and a 45-36 win in the sectional final). The other setback was a 74-71 thriller with Martinsville to cap the regular season.

“We want the pace, we try to get as many possessions as we can,” Sabol said. “So it will be a battle of pace. Whatever it takes to win. If we need to play defense, it we need to rebound, if we need to score, I like to think we can win multiple ways.

“But Castle has weapons. They have so many girls that can score, athletes who can slash to the basket. You can’t key on one player.”

Franklin has never won a 4A regional. The last of its four regional titles came in 1999 during that 3A tournament.

“It would mean everything,” Sabol said of a potential championship. “This would be the best season Franklin has ever had. Our kids will be ready.”

The regional winner will advance to the one-game semistate on Feb. 20 at either Jasper or Jeffersonville.

Class 4A at BNL

Last meeting: This is the first meeting between the programs.