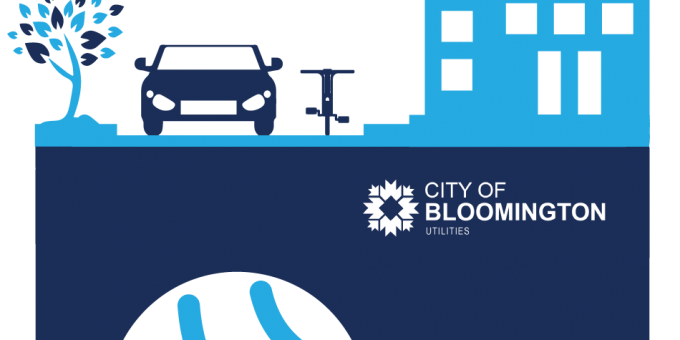 A network of culverts under downtown Bloomington carries the Campus River (formerly Jordan River) from Dunn Meadow at Indiana Avenue to 1st Street and College Avenue, where it reappears as Clear Creek.

Over the next two years, CBU and its contractor, Milestone Contractors, LLP will be reconstructing 1,829 feet of these culverts. In addition to stormwater improvements, some reconstruction of sanitary sewers and water main infrastructure will be simultaneously completed to support Bloomington’s vibrant downtown.

Work is slated to begin at the downstream connection to the existing culvert on Washington Street between Smith Avenue and 2nd Street on Monday, February 15, and will require a section of Washington Street to be closed for approximately two months.

Reconstruction of several sections of the upstream and downstream sections has already been accomplished.

The Hidden River Pathway Project completes the middle section, which runs from 423 South Washington Street, east of Middle Way House, across Smith Avenue, through the Waldron, Hill, and Buskirk (Third Street) Park and along Lincoln Street, across 3rd Street, curving east behind the Bloomington Fire Station No. 1, across 4th St, through the surface parking lot at 4th & Grant and ending in the alley north of 113 South Grant Street. (See map below.)

“Improving our capacity to handle stormwater in downtown Bloomington is critical to our sustainability – both from an environmental perspective and an economic one,” said Mayor John Hamilton. “We appreciate the water customers funding this essential repair, and CBU’s continued leadership in managing the built environment, dealing with impacts of climate change, and investing in our community in ways that brighten our future.”

The culverts that currently carry stormwater beneath Bloomington’s downtown are some of the oldest storm sewers in the city; some masonry arches date to 1900. CBU has already repaired much stormwater infrastructure under downtown Bloomington in the past 20 years.

This phase of the reconstruction is essential to prevent flooding and potential structural failures, such as the culvert underneath the intersection at 3rd and Lincoln streets, which required an emergency repair in 2017. The current infrastructure is inadequate for the volume of stormwater downtown Bloomington now experiences a result of increased impervious surface area and the intensified rain events associated with climate change.

The new culverts will have twice the capacity of those they are replacing and incorporate best practices in the stormwater industry. CBU’s stormwater management plan encompasses a $400,000 annual investment in green infrastructure (including bioswales, permeable pavement, and related landscaping approaches) in addition to traditional infrastructure construction.

Opportunities for additional improvements to be undertaken simultaneously by other City departments were identified during the design phase of this project. The Departments of Public Works and Engineering will replace the traffic signal at 3rd and Lincoln street, and make street parking updates.

The Department of Parks and Recreation will enhance the playground at Waldron, Hill, and Buskirk (Third Street) Park, and the City’s Economic and Sustainable Development Department is identifying public art components that will increase awareness of the underground river, our natural resources, and Bloomington’s long-term sustainability in connection with stormwater issues.

In order to expedite the project schedule, the contractor will deploy crews in multiple work zones simultaneously, which may require the closure of one or both lanes in different blocks.

CBU and the contractor have been working closely with impacted businesses and service providers along the construction route to ensure access to facilities and prepare for parking needs.

Bloomington Transit buses will be able to operate on their regular schedules. CBU has also coordinated with the police and fire departments to ensure unimpeded delivery of public safety services as construction progresses around the stations.

The construction cost is expected to be just more than $13,000,000, with funding from the 2019 stormwater fee adjustment for all CBU customers. Learn more about the project and get updates at ww.bloomington.in.gov/utilities/hidden-river.