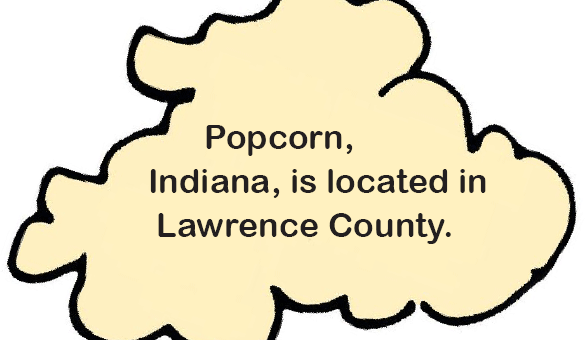 Popcorn – It’s ingrained in American culture and buried deep in the hearts of Hoosiers. And it should be: We grow it. We sell it. We eat it.

Our state fair used popcorn as its theme in 2013 and there’s even a small, unincorporated Southern Indiana town named after one of America’s favorite snacks. Popcorn is an unincorporated community in Perry Township, in Lawrence County.

Second only to Nebraska, Indiana produces one quarter of the nation’s popcorn, according to the USDA.

But popcorn isn’t all ours. Around 1948 the oldest ears of popcorn were discovered in a cave in New Mexico and carbon dating revealed those ears were at least 5,000 old.

In 1893, Charles Cretors came up with the first steam-powered, automated machine that could make popcorn on the go, and at the turn of the 20th century Cretors created the first large horse-drawn popcorn wagon. Cretors kept up with the times as Indiana and the country were drawn to movie theaters, where popcorn quickly turned into a necessity, and they created smaller machines to be used by theaters and others.

And popcorn kept families company during the Great Depression—at movie theaters, fairs, and at home—because it was inexpensive and readily available. It thrived while other commodities took a turn for the worse. And there were twists and turns in popcorn’s popularity. For example, when TVs became popular in homes some feared that days were numbered for movie theaters and their signature snack. But strong marketing campaigns and inventions such as microwave popcorn revived the small but mighty snack’s popularity.

The Weaver Popcorn Company, known by many as Pop Weaver, has been an Indiana staple since Reverend Ira Weaver founded the company in 1928. Located in Whitestown, just north of Indianapolis, this company has come a long way since its beginning when Reverend Weaver was shucking, bagging and delivering his popped kernels with a horse-drawn carriage. Now, the company’s website says it produces over 30% of the world’s popcorn, which makes the company a local, national and international favorite.

Located in Francesville, “A Small Town with a Big Heart,” Gutwein (pronounced GOOT-wine) Popcorn Company was established in 1998 and believes rich, fertile soil is the key to popcorn that tastes great.

While they have been in the popcorn business less than 20 years, the family has been part of Indiana agriculture since 1906, when Philip Gutwein Sr. established himself as an area farmer and miller.

They opened a new, state-of-the-art processing facility where they can further explore their love of the kernel and sell 30 to 35 million pounds of popcorn per year. They offer a wide variety of gourmet popcorn products, from gift baskets to bulk popcorn kernels, and offer microwave and stovetop popping varieties.

Located in Ramsey, this fourth-generation company has built itself upon the saying “We are truly Indiana, born and bred, and PopCORN fed!” Once centered on a small farm, this bustling company now ships popcorn all over the world.

Look them up and you might just meet Cousin Willie, the face of the company and one of their most popular popcorn lines. He was dedicated to his community, which came to him true from his father, Edward Sieg, who was instrumental in building the community school corporation in the northern part of Harrison County, where the company is located. Cousin Willie followed in his footsteps, serving on the same school board as an advocate for educational growth in the area. He also played a large part in local water efforts as a member of the local water board, which focused on transitioning the rural well- and cistern-based community to a high-tech water system; today, this system provides water to thousands in three Southern Indiana counties.

Cousin Willie’s great-great-great-great-grandfather was Dennis Pennington, a tireless fighter for the anti-slavery movement in the late 1700s and early 1800s in the Indiana Territory. Pennington is quoted as saying, “Let us be on our guard when our convention men are chosen that they are men opposed to slavery.” Dennis Pennington was also awarded the contract to build the capitol building in the early 1800s in Corydon, Indiana, which was Indiana’s first state capital. Cousin Willie passed away in 2006, but the company lives on with his image, Hoosier beliefs, and stellar popcorn quality in mind. They offer non-GMO popcorn items. Their most popular product is Cousin Willie’s Buttery Explosion Microwave Popcorn. Their newest product is Mauve Popcorn that has virtually no hulls and contains no artificial fillers.

No story about popcorn would be complete with the mention of Indiana popcorn icon Orville Redenbacher. Born in 1907, he grew up in Brazil, in the southwestern part of the state, and earned a degree from Purdue University, where he studied agriculture and ran track (he paid for his education with money he earned by selling popcorn as a child and teenager).

He worked for a short period in the 1940s for an Indiana farm in Princeton. Then, in 1951 he moved to the northern part of the state, Valparaiso, and started a business with a small seed company. He sold popcorn out of the back of his car and continued to develop and improve his products for years.

His popcorn, bearing his name, took the United States by storm in the 1970s as households far and wide were twitterpated by the bowtie-clad, nerdy Redenbacher gracing their television screens. During his commercials, he took a bite of his fluffy popcorn and said “You’ll like it better or my name isn’t Orville Redenbacher.”