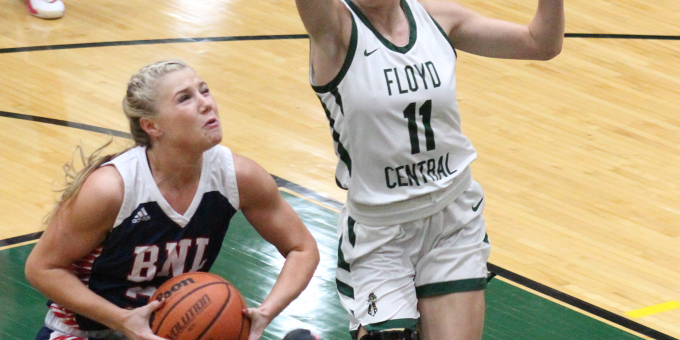 BEDFORD – On the road again. Bedford North Lawrence, logging enough miles for frequent flyer rewards, will continue its NBA-style schedule with another journey.

The Stars, playing their fourth road game in the last six days, will visit Vincennes Lincoln on Monday night, and the Alices can claim an equal status of weariness. Lincoln will be hitting the court for the fifth time in seven days.

Blame the schedule traffic jam on virus shutdowns. In the quest to make up games in a short time window, many teams across the state have games piled up in the two weeks before the start of the state tournament series.

“The short turnaround gives little to no time to prepare,” Lincoln coach Tim Young said. “However the girls would rather play games than practice.”

The Alices (8-7) have had mixed reviews during their nonstop action of the last week. They lost a 47-46 decision to Loogootee, dropped Evansville Central 54-46, lost another tough one to Evansville North (54-53 on a 30-footer at the buzzer) and stopped South Knox 58-48 on Saturday.

Lincoln’s main weapon is 6-0 senior Maycee Lange, a Junior All-Star selection who has signed with the University of Evansville. She’s the second player in program history to score over 1,000 career points.

“BNL is one of the best teams in the state,” Young said. “Currently our program is not on the same level, according to all the ratings. We will need to play our best game of the year to be competitive.”

The Stars are coming off a 57-37 triumph over Floyd Central on Saturday. Spreen and Gomez both scored 17 points, although BNL was a tepid 9 of 27 from long range. That can be blamed on tired legs. BNL also did not press to any great extent, which is usually a key part of its attack, and Lincoln has struggled with turnovers in the past.

“We’re almost to the end of this road tour,” BNL coach Jeff Allen said. “Hopefully we’ll shoot a little better with a day of rest, not pound them into the ground so much.”