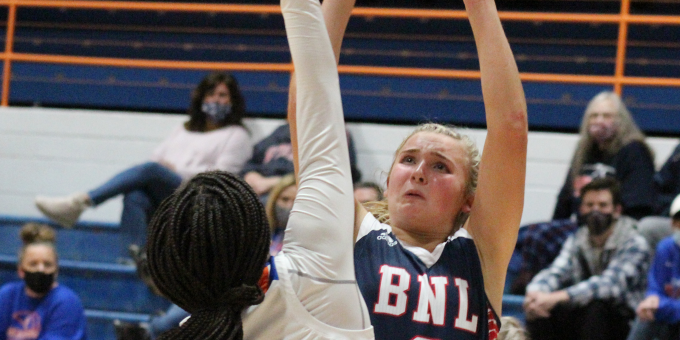 SELLERSBURG – Jeff Allen, his thunderous, military-toned coach voice echoing loud in a gymnasium with only a few screamers in attendance, tugged on the reins as hard as he could, trying to slow down his race-horse team.

Protecting a one-possession lead, fighting every instinct to floor it rather than hit the brakes, Class 4A No.2 Bedford North Lawrence shifted into smart mode for an impressive victory.

In clutch time, with the outcome in doubt during the final two minutes, the Stars slowed to succeed and made a fast getaway with a 59-54 triumph over Class 3A No.1 Silver Creek on Thursday night. Chloe McKnight scored 14 points as BNL (15-2) rebounded from the heartbreak of the conference loss at Columbus East with a win to circle and remember.

Stressed and pressed, the Stars were cool in the most heated moments during the closing 120 seconds, with a 50-48 lead to maintain. Karsyn Norman sliced into an opening in the paint and scored. McKnight buried two free throws, and Jenna Louden added two more to cement a tough, high-level conquest of a state elite.

Considering the Stars had their aura of invincibility shattered just 48 hours earlier, considering the Dragons (15-3) had marked this rematch in red ink after seeing red during a 31-point beatdown in last year’s clash, this was arguably BNL’s most important win so far.

“That’s a great, great win against a really good team,” Allen said. “Just a great team win, to come back from a tough loss. I thought we played so hard, it makes me so happy. I just wish we played a little smarter some times, but we made plays when we needed.”

Basketball IQ has always been a strength of the Stars, although this team loves the thrill of the chase and the speed of the pursuit. Aggression has usually been rewarded, but this time discretion was the better path. BNL executed brilliantly during a tense final quarter.

Norman started the last frame with a 3-point play, and Irye Gomez twisted through the lane for a bucket and a 50-46 lead. Haley Deckard, whose contributions off the bench were almost immeasurable, converted a layup off an Irye Gomez drive. Norman’s floater in the paint gave BNL a 54-49 lead.

After Silver Creek’s Alana Striverson bombed a 3-pointer, McKnight cashed two at the line. Striverson converted a pair at the line, and Louden followed with her two perfect free throws with 25 seconds left. The Dragons finally faded with a late miss. BNL didn’t shoot a 3-pointer in the final quarter and had only 1 turnover.

“I think that wins championships and big games,” Allen said. “I knew if we could get in position where they had to foul us, our free-throw shooting (73 percent for the season) has been really good. That’s a plus.”

BNL was in charger mode to start, with Chloe Spreen igniting a 13-4 opening burst with a pair of 3-pointers. That was certainly an improvement over the 24-3 anomaly at East.

“I wanted her to play more free and easy,” Allen said. “She needs to be more aggressive, and she was early. She got us off to a great start.”

Silver Creek, which never led, was in scramble technique, especially after BNL went on a 9-0 surge to a 25-15 lead in the second quarter. The Dragons were depending on senior center Marissa Gasaway to clean up misses, on Striverson and her sister Kynidi to spark the comeback. And that worked as Creek went on an 10-2 run to pull even at 44-44 (the only deadlock).

That set the stage for the dramatic conclusion.

“They execute so well,” Silver Creek coach Scott Schoen said. “That was the difference, their execution down the stretch was better than ours.

“We’ve had the opportunity to play the No.1, 2 and 3 teams in 4A. After playing those teams, as far as teams, I feel Bedford is the best team with multiple scorers. When they’re hitting, it’s dangerous.”

BNL had all kinds of scorers. In addition to McKnight, Deckard was key off the bench with 12 points (including a pair of treys), Spreen totaled 11 and Norman added 10.

“She’s the type of kid you love having in your program,” Allen said of Deckard. “She’s a kid I tell her once, and she does what I asked her to do. She’s come through for us in big games before.”

BNL also hit 10 treys, helping build the lead. Silver Creek had to select its best defensive option, which was keeping McKnight and Gomez from going crazy from deep.

“We were trying to take the paint away on the drive,” Schoen said. “We didn’t want to help off the guards. You can’t. Just name them all. Stay home with the shooters.

“That’s one of our keys, to win the rebounding war. Gasaway is so active on the boards, that gives us an advantage. Win the boards and cut down their 3-point shots. We got one of the two.”

The Stars had to expend a lot of energy to keep Silver Creek from decimating them on the offensive glass. The Dragons got 18 second chances and converted multiple times. BNL countered that with the long-distance shooting and the intelligent finish.

“You heard my voice over there, right?” Allen asked with a smile. “I do a lot of screaming over there, just to get them in the right spots. They’re aggressive basketball players, they want to go score and sometimes it’s tough to dial them back.”

“It’s really tough,” McKnight said. “We like to push it, go fast and score. We’re a fast-paced team. This was really big, coming off the loss, just to get our confidence back up.”