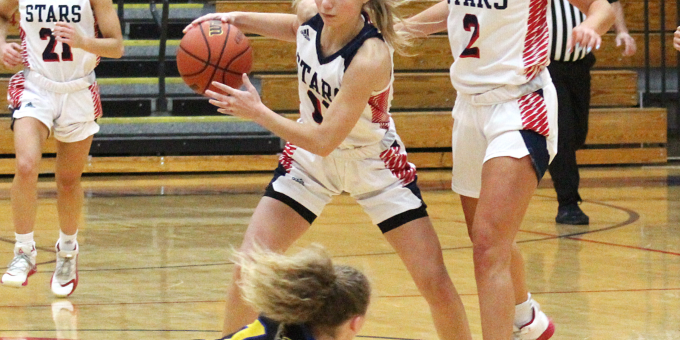 BEDFORD – In this age of entitlement, when precious items are expected without paying the proper price, nobody is handed the Hoosier Hills Conference championship. It must be earned.

Bedford North Lawrence, if possession is indeed 9/10ths of the law, could view the conference crown as common-law property, since the program has claimed 21 titles during its 42 years in the league and has shared the last three championships. But each season, that trophy license must be validated.

The No.2 Stars (14-1) will seek to clinch a share of the HHC title on Tuesday night, visiting Columbus East in a clash of the last two unbeaten league contenders. BNL is 5-0 in the conference, while the Olympians (9-5 overall) are 4-0 in the standings.

It doesn’t get bigger than this. And they don’t get any bigger than the Olympians, who have three 6-foot-plus starters on the frontline and a star scorer in the backcourt. In the race for the top spot, this is BNL’s tallest challenge yet.

East will feature junior standout Koryn Greiwe, a three-year starter who checks every line on the stat sheet at 16.6 points, 4.9 rebounds and 4.9 assists. In a testament to East’s strength, her scoring has dipped slightly this season, but her other numbers have jumped as the Olympians have power at her side.

“They have more people involved, and they have size, which is an issue for us,” BNL coach Jeff Allen said. “We’ll have to rebound, deal with their zone, hopefully make shots.

“It’s a tough game. They’re playing well. They have some losses, but they really beefed the schedule up with tough teams. So they’re experienced. We’ll have to go over there and play well.”

East’s five losses have come against opponents – four currently ranked in the Top 10 – with a combined record of 61-11. The Olympians might be young, but the future is now as they face a nemesis. BNL has won 9 straight in the series by an average of 23.5 points.

Last year, the Stars posted a 74-54 win at BNL Fieldhouse. East started with an 11-2 lead as BNL missed its first 10 shots, then Chloe McKnight exploded for 7 treys and a career-high 33 points.

McKnight, who will undoubtedly receive special attention this time, leads the Stars in scoring at 15.0 while freshman Chloe Spreen adds 14.9 and senior Irye Gomez (who had 22 last year against East) totals 11.7.

“We’ll have to be at our best on Tuesday,” East coach Danny Brown said.

BNL’s key will be dictating tempo and forcing the Olympians to an uncomfortable speed. The Stars are averaging 14.6 steals with their constant ball pressure.

“We’ll try to make it a fast-paced game,” Allen said. “We think that favors us, that’s for sure. And they’ll try to keep it a half-court, zone game, because that favors them. It’s a contrast of two styles. It’ll be a fun game.”

BNL, with 10 consecutive wins, is in the midst of a tough three-game schedule test. The Stars whacked Castle 60-38 on Saturday, and after the clash with East they will visit Class 3A No.2 Silver Creek on Thursday.

“It’s a tough week for us,” Allen said. “The big focus is trying to win a conference championship. We’ve got a lot of big games coming up in a short period of time, but that’s the focus. We’ve got all of our attention on Columbus East.”

Last meeting: Last year at BNL, Chloe McKnight hit seven 3-pointers and scored a career-high 33 points as the Stars rolled to a 74-54 victory. Irye Gomez added 22 points for BNL. Koryn Griewe had 17 points for the Olympians.

Game notes: BNL has won nine straight in the series by an average of 23.5 points. East has won eight HHC titles, the last in 2008.