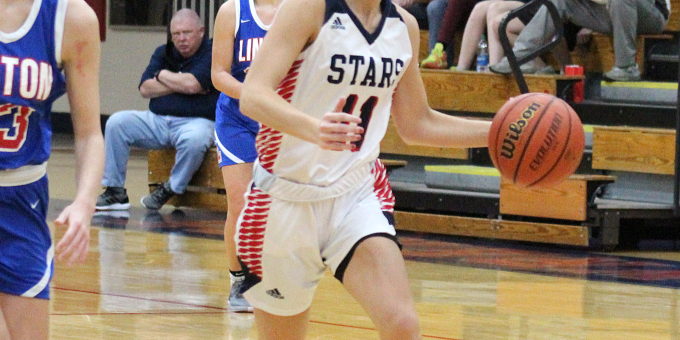 BEDFORD – That distinct sizzling sound, like the crackling of bacon on a Saturday morning, like the burning of wood in the fireplace on a cold winter night, was radiating from Chloe McKnight.

Bedford North Lawrence’s senior super shooter, with the flick of her right wrist, became basketball’s version of the Human Torch, on fire and fantastic. Her flames burned down the state’s best Class 2A team.

McKnight, chilled during the morning-round win over Eastern Pekin, exploded for a career-high nine 3-pointers – matching Brittani Rizzi’s school record – and blistered Linton for 29 points as the Stars claimed the title in the Limestone Classic on Tuesday night.

While McKnight set offensive fires, BNL’s defense doused them as the Stars conquered Linton 60-45, handing the top-ranked squad in Class 2A its first defeat. Chloe Spreen added 15 points for the Stars, ranked No.6 in 4A and now 11-1 with a high-profile, high-level signature victory.

That celebrated “star” in the southwest sky? Paled in comparison to the Star in BNL Fieldhouse. McKnight made three straight 3-pointers to end the first half as BNL erased an 8-point deficit, then made four in a row during a personal highlight video to open the fourth quarter. Burn, baby, burn.

“Next time,” Linton coach Jared Rehmel said with a deadpan voice and roll of the eyes behind that face mask, “we’ll have her on the scouting report.”

BNL needed that kind of heat. The Miners (12-1) were worthy of their ranking, challenging the Stars in every phase while pushing to a 19-11 lead, while digging out a 26-19 advantage late in the first half. At that point, McKnight had 2 points.

Then, like the Hawaiian volcano, she started to spew shots like lava. The first was a pull-up trey in transition, the next was a wing jumper as BNL roared to a 27-26 lead at intermission. The next two came during BNL’s 14-2 burst to start the third quarter. And the last four – from both wings and the deep corner – came in a brilliant eruption to a 58-41 advantage in the final frame.

“I made one and just got the rhythm down,” she said with her soft smile. “Just kept making them.” Just hours earlier, she was a cool 1-for-9. Now she was a torrid 9-of-13.

“She’s got that shooter’s mentality,” BNL coach Jeff Allen said. “If you‘re not hot, shoot until you get hot. I’m happy for her. She struggled with not making shots, it’s a big part of her game.

“For her to come out against a team like that, really shine and shoot the ball, it was a big part of our success. We don’t win without her.”

The Miners (12-1) forced the best from BNL. They scored 8 straight points to end the first quarter with treys from Jaylee Hayes and Haley Rose, plus an interior bucket from Vanessa Shafford, for a 16-11 lead. Shafford started the second quarter with a bomb from the key for Linton’s biggest lead.

But Linton made the mistake of slowing down, hoping to keep its lead intact until halftime.

“We went to our spread offense, trying to get to halftime, and our girls lost their aggressiveness,” Linton coach Jared Rehmel said. “Not only that, Chloe makes that transition three. And you could just feel it. At that moment, that was a game changer. When she sees one go in . . .”

No need to finish that thought.

BNL was devastating to start the third with the McKnight jumpers, with Irye Gomez swishing a trey off an inbound set, with Karsyn Norman burying another.

That surge threatened to bury the Miners, but Linton responded with the heart of a defending state champion. Nine consecutive points, as BNL got sloppy and Shafford scored twice off steals, got Linton back in business, cutting the deficit to four.

“Our girls continued to compete,” Rehmel said. “A lot of teams at that point, especially against a Bedford team that’s really good, kind of crumble and it gets real bad.

“Our girls took the punch and responded well. I was super proud of how we competed against, in my opinion, a top three or four team in the state.”

That set the stage for the final McKnight flurry. Boom, boom, swish, swish. Flame on. BNL dashed to the 17-point lead before two Aubrey Burgess free throws with 3:46 ended the streak. Way too late.

“It was a poor job of us communicating,” Rehmel said. “But there are so many weapons. You’re so focused on so many, and now the one that’s hot is still going. If we fly out at her, Chloe Spreen is inside, one on one, and nobody wants that. Chloe got loose and did what good shooters do.”

Overshadowed by the offensive fireworks, BNL’s defense was superb. The Miners were one of the state’s top scoring teams at 70 points per game. They could not get loose. Burgess finished with 15 points and Shafford (that pair is destined for Southern Indiana) added 13.

“I think that’s the best team we’ve faced since North Central,” Allen said. “They’re very talented, they’re tough, they really understand the game. I see why they’re No.1 in 2A.

“I thought we were getting outworked a little bit early, but I thought the kids really stepped up and battled back. They came out and played as absolutely hard as they could in the first two minutes of the second half.”

BNL will return to action on Jan. 2 against East Central.

Kyia McKinley had 14 points and Kendra Sills totaled 11 for the Musketeers (5-5).