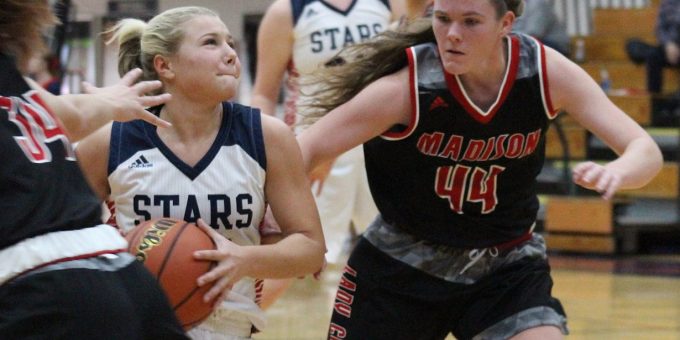 BEDFORD – Cold starts, particularly in the chill of winter, can cause engine damage. While it’s usually unavoidable, it’s not recommended. Best to let the oil circulate before taking off.

Bedford North Lawrence, after a week without practice because of a school-mandated shutdown of all extracurricular activities, will restart it high-octane basketball engine on Saturday afternoon, hitting the road to face Madison.

This is not the best-case scenario, but in this virus-dictated world, it’s unavoidable. The No.7 Stars haven’t played since the 62-37 victory over Seymour on Dec. 9, and they haven’t been on the court at all this week. But away they go to a big Hoosier Hills Conference showdown between two of the league frontrunners.

The Cubs (4-4 overall) have won 3 straight games, all in the league to challenge for the top spot as they chase their first conference title since 1980, and they’ve had a week to prepare for the Stars (8-1, 4-0).

BNL will be back at full strength as senior forward Irye Gomez (11.6 points per game) has been cleared to return from quarantine. She missed only one game. So the question to be answered is how much rust has gathered on the Stars during their down time.

“I think you have to have faith in your kids, which I do,” BNL coach Jeff Allen said. “When the kids are competitors, like mine are, they’ll be ready to play.

“They’re high-level kids. They’re going to be ready. It’s not the perfect situation. As a coach, you’d like to have some prep time. But I trust my kids. Having the opportunity to play, I didn’t want to turn it down. Let’s go play.”

Allen compared the unprecedented “pause” of practice and play to down time caused by snowstorms.

“This happened to us a couple of year ago, where we had snow days for a week straight, didn’t practice, and played a really good North Harrison team,” Allen said. “And the kids played really well.

“It’ll be a challenge, from the bench, to manage kids and make sure we’re keeping fresh legs out there. But I think the kids will be excited to play and come out with great effort.”

Madison started slowly at 1-4, but the Cubs streaked to new life with victories over Jeffersonville (53-34), Floyd Central (43-23) and Seymour (55-47 in OT). They will feature one of the top post players in Southern Indiana in 6-1 senior Jade Nutley, who’s averaging 19.9 points per game.

“They’re playing pretty well and Nutley is one of the best players in the conference,” Allen said. “She’s a challenge for us from a size standpoint. We’ll have to do a good job defensively on her, and try to get out to play our pace – if we have the legs to sustain that.

“She’s basically the No.1 option for their team and they run a lot of stuff through her. I would, too, She’s really good. We have to control her the best we can.”

Nutley has scored 1,125 career points (currently seventh on the school list) and added 743 rebounds, which puts her within range of Olivia Crozier’s school record of 920 boards. She will get offensive support from junior Taylor Lynch (10.1 points).

BNL has won 14 straight in the series after last year’s 63-43 triumph. Chloe McKnight paced the Stars with 19 points while Madison Webb added 15. Lynch scored 11 for the Cubs, but Nutley was limited to 4 points.

Freshman star Chloe Spreen leads BNL in scoring (15.7) and rebounding (5.3), while McKnight is contributing 14.9 points and 4.2 boards. With Gomez back in action, that gives BNL four main offensive threats once again (Karsyn Norman adds 9.3) and the defensive instigators (both McKnight and Gomez are averaging over 3 steals per game) to apply maximum pressure.

“BNL is a very solid team,” Madison coach Sonja Bowyer said. “They do a great job of handling the ball and overall pressure. Our team is looking forward to the challenge and they’re excited to play a talented team.”

Last meeting: Last year at BNL, the Stars rolled to a 63-43 win. Chloe McKnight had 19 points and Madison Webb added 15 for the Stars. Taylor Lynch has 11 for the Cubs.

Game notes: BNL has won 14 straight games in the series. Madison won a share of its only HHC title in 1980.