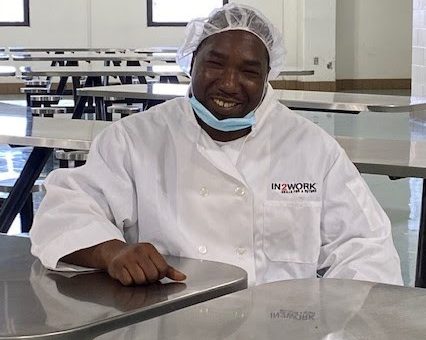 (CARLISLE) – Aramark is the contracted food service provider for the Wabash Valley Correctional Facility (WVCF).  Not only does Aramark provide the food for all the meals served at WVCF, they also coordinate the IN2WORK program.

The goal of the IN2WORK program is to give offenders the skills necessary to become more employable upon release.  The program includes vocational training in a classroom setting, as well as the kitchen.  The program is separated into three phases: kitchen basics, food service management, and ServSafe certification.  Participants take quizzes and exams to ensure they are absorbing the content.

Internships are also available to graduates who display a high level of performance.  The interns gain knowledge as they work alongside front-line managers.  The skills they acquire during their internship are designed to transfer into real-world jobs upon release.  During the internships, the participants work part-time and earn minimum wage.  Currently, Shawn Twitty and Steven Davis are both interns at WVCF.