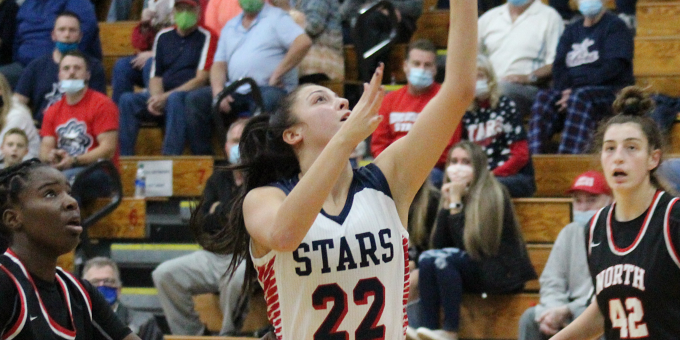 BEDFORD – Size matters? When measuring the size of the fight in the dog, absolutely. Bedford North Lawrence proved that with an intense, emphatic victory over a high-level state contender.

The little things mattered. Defending like desperate demons, despite giving away 3-plus inches at almost every interior position. Rebounding like hungry animals, with the smallest kid on the court collecting the most boards. Converting clutch free throws in the fourth quarter.

When the smoke cleared from the heavyweight clash between two ranked challengers, the Stars had cut down a giant opponent.

The sixth-ranked Stars, with a gritty second half, conquered No.3 North Central 65-57 on Friday night. Irye Gomez scored 17 points while Chloe McKnight and Karsyn Norman added 15 each, powering BNL (3-0) to its first win over the Panthers in six years.

With BNL Fieldhouse at its electric best, even with sound-muffling mask protocols and crowd limitations in place, the Stars rallied from an 8-point deficit in the first half to post a victory of momentum and confidence.

The Stars claimed the lead on Norman’s wing 3-pointer midway through the third quarter, and they held on with bloody fingernails and anxious grips. North Central’s last lead came with four minutes remaining, but two straight Gomez buckets and eight straight free throws in the last minute were huge shots of oxygen in a breathless battle.

“Our senior leadership is spilling over,” BNL coach Jeff Allen said. “We’ve been in some big games the last several years. Crunch time, those kids really come through. You have to have that to win big games.”

This was the biggest one thus far, although many more are ahead. The Panthers were fresh off a win over defending state champion Lawrence North, and they had superior size advantages inside with All-Star candidate Meg Newman (6-3 and headed to Arizona State) and IUPUI recruit Nakaih Hunter.

Too big to handle? BNL won the rebounding battle 37-34, with point guard Jenna Louden (listed at 5-6, a number that might demand a recount) grabbing a game-high 8. That was indicative of the size of BNL’s fight.

“It’s disappointing that they controlled the boards like they did on us,” North Central coach Dee Ann Ramey said. “No excuses. They had more desire to get this win. They wanted this win. It showed by their intensity, and we didn’t match their intensity.”

BNL shot in front quickly as Gomez ripped her first two treys, Norman swished a bomb from the key and Makena Moore buried one from the corner for a 17-12 edge. But the Panthers got a huge lift from reserve Destinee Hooks, who ignited a charge with 8 second-quarter points. Alivia Terry’s trey and Dynasty Witherspoon’s 15-footer pushed North Central to a 33-25 lead.

BNL’s first important moments, with North Central threatening to run away and the Stars showing some instability, were the final minutes of the half as Norman scored off an inbounds set and Haley Deckard converted a rebound basket.

Down 4 at the break, BNL kept surging as freshman Chloe Spreen made her first impact with two interior baskets. McKnight’s 3-pointer and Norman’s bomb gave BNL a 40-37 lead, and the stage was set for the fist-clenched finish.

Tanyuel Welch’s steal and layup gave the Panthers a 53-52 lead, but Gomez answered with a trey and a layup off a lob pass.

“That’s a senior,” Allen said. “Her leadership has just grown and grown. She’s been such a pleasure to watch develop. Big players step up in big games. Irye’s a pretty good one.”

McKnight, Norman and Louden finished off the victory was a 10-for-10 performance at the free-throw line in the final minute as North Central fouled to apply pressure and extend the contest in case BNL should crack. It did not work.

Welch paced the Panthers with 15 points but was only 4 of 19 from the field. Newman had 14 points, including 12 in the second half, while Hooks finished with 11. BNL shifted out of its usual zone defense and went face-to-face (or least least face-to-shoulder with their taller foes) and won.

“We had some adversity going on out there, and they just dug in and fought on the defensive end,” Allen said. “We’re scrapping the zone because we’re not rebounding, and we’re guarding them. It is what it is.

“With our lack of size, we talked about our forwards clearing people out and our guards coming in to pick up the rebounds. Jenna just naturally does a good job of that. She has a knack for it. She did a great job.”

Gomez was 5-of-6 from long range as BNL hit 11 from distance – more than their first two games combined.

“They shot the heck out of the three,” Ramey said. “We knew they would. I didn’t think they’d do it that well. It’s tough to come down here. Sometimes you’re put in difficult situations and you have to respond. We didn’t respond. We weren’t prepared.”

Nothing was bigger than the rebounding stat line. Deckard had 7 boards, McKnight grabbed 6.

“Just get a body on them and shove them out. We had to pull that rebound down,” Gomez said. “That was extremely tough. That was the hardest game ever. I’m glad we came out on top. We encouraged each other so much.“

The impact of the win, in terms of state rankings, reputation and confidence, cannot be understated.

“That’s a good basketball team,” Allen said. “They’ve dominated us for the last few years. They have athletes that are sometimes superior to ours. But this year our quickness is better, and we have kids that know how to score. It feels good to get one on them.”

BNL will return to action on Wednesday night, hosting Mooresville.