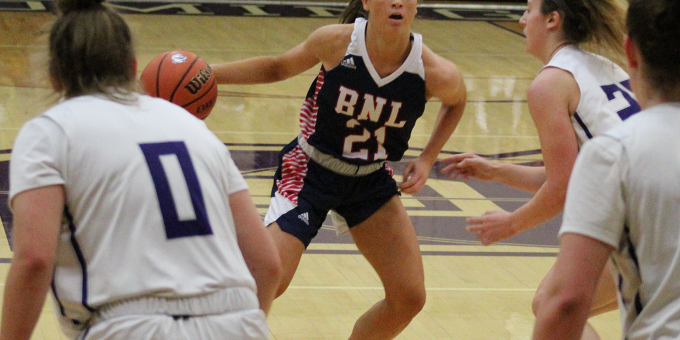 BEDFORD – If Bedford North Lawrence has an Achilles heel, just judging from the eye test and the roster heights, it’s a lack of size. Can the small Stars rebound with brutes and defend the post against power? That’s been the question all season, although no one has been able to exploit that yet.

Now they’re going to find out. North Central will bring the arrows and take dead aim at BNL’s vulnerability in a seismic clash with state-wide implications on Friday night.

No.3 North Central, a definite nemesis with five consecutive wins over BNL, will rumble into BNL Fieldhouse, posing the ultimate test for the No.6 Stars. The Panthers (4-0) will be among the tallest (three starters tower over 6-0), most talented (three Div. I recruits) and most athletic (the Panthers will match BNL’s pressure tactics) teams in Indiana.

“It’s a tall order,” BNL coach Jeff Allen said. “They’ve got talent and size. It’ll be a great test for us. But we feel like we’re athletic and quick. We’ll try to make it difficult.”

Newman had 18 points during Wednesday’s 58-43 victory over Lawrence North, the defending state champion, while Hunter added 14 and Welch totaled 12. Welch has been North Central’s most consistent star, totaling 12 points against Brownsburg and 15 against Westfield.

BNL (2-0 after impressive wins over Lanesville and Bloomington South) will counter with the balanced attack of freshman Chloe Spreen (19.5 points per game), Chloe McKnight (14.5), Irye Gomez (12.0) and Karsyn Norman (10.0).

Last year, the Stars were on the verge of a huge road win over the Panthers, but an 8-point lead slipped away as North Central went on a late 17-1 run for a 59-52 triumph. BNL’s 8 fourth-quarter turnovers, and North Central’s 12-1 edge in free throws during its late surge, were the keys.

McKnight was BNL’s catalyst that night with 19 points (including 13 in the third quarter) while Northwestern recruit Jasmine McWilliams had 15 for the Panthers. BNL finished with 19 turnovers.

“We did a great job of handling their pressure until the fourth quarter,” Allen said. “Hopefully we’re a little more seasoned. We’ll have to handle the pressure, and we’ll have to rebound with them. If we can do those two things, we’ll be in the basketball game.”

Last meeting: Last year at North Central, down 48-40 with 6:05 left, the Panthers clawed back during a 17-1 run en route to a 59-52 triumph. Chloe McKnight had 19 points for the Stars, while Jasmine McWilliams had 15 for the Panthers.