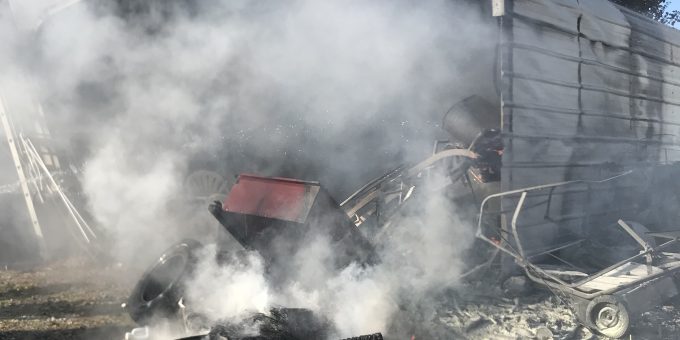 (BEDFORD) – Neighbors using a garden hose and several fire extinguishers were able to keep a fire from spreading into a home when a carport caught fire Sunday afternoon.

Windy conditions could have easily carried the fire into the home.

A neighbor in the 2200 block of Mt. Pleasant Road heard a loud explosion and saw the fire inside a carport next to a garage and modular home.

The neighbor called 911 at 2:32 p.m. to report the fire. Firefighters from Shawswick, Oolitic, and Pleasant Run Volunteer Fire Departments responded to the scene.

The home owned is by Phillip and Rebecca Bailey of Bedford.

Firefighters were able to get the fire under control quickly. No one was injured battling the blaze.

The homeowners were out of town when the fire occurred.

Marshall Township was originally summoned to respond but those firefighters were working putting out a wildland fire at 2 Graber Court.