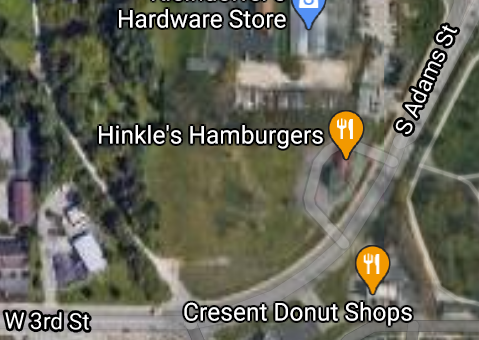 (BLOOMINGTON) – Mayor John Hamilton and the Bloomington City Council will inaugurate the City’s first protected bicycle lane and pedestrian enhancements on West Adams Street between West Patterson Drive and West Kirkwood Avenue with brief remarks and a ribbon-cutting Tuesday from Noon until 1 p.m.

Because of space limitations at the site and COVID precautions, the event will not be open to the general public, but will be streamed live at facebook.com/citybloomington.

This event celebrates the recent completion of improvements to West Adams Street between West Patterson Street and West Kirkwood Avenue that include a protected bicycle lane, sidewalks on both sides of the street, and street tree plots.

The street was not expanded, but redesigned to improve safety and efficiency while facilitating the movement of a broader scope of users by increasing capacity for walking and bicycling.

A protected bicycle lane physically separates bicycle traffic from car traffic, which in this case was accomplished by adding curbs and trees to the street. Research shows that the increased safety and comfort provided by protected bicycle lanes attracts more users and a more diverse range of users.