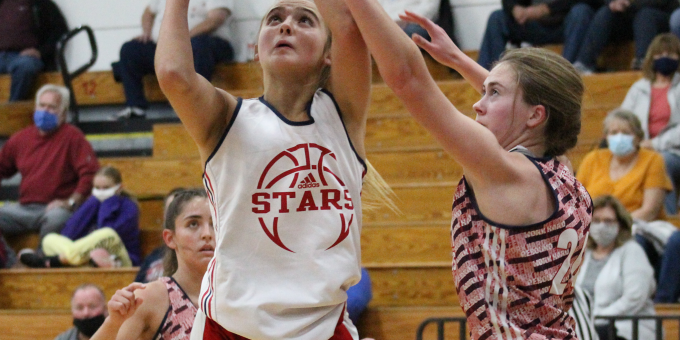 BEDFORD – After revealing the glimpse of Bedford North Lawrence’s adjusted style and Gatling gun offense, rapid fire and wrecking havoc, in the intrasquad scrimmage, the Stars will get a more in-depth examination in the final preseason workout.

BNL will host Class 3A power Heritage Christian on Saturday afternoon in the IHSAA sanctioned scrimmage, an important step against outside competition rather than in-house skirmishes.

The Eagles will feature a veteran team with size, athleticism and a Div. I recruit ranked among the state’s best point guards. It’s a perfect test as BNL works through its issues – including the constant virus threat – and roars toward the season opener.

The scripted scrimmage, played with different defenses and certain restrictions in each quarter, will allow BNL to see how deep its roster can go and how effective its fast-paced attack can be against a quality foe.

The Stars hit 16 treys, pressed after misses and launched after few passes in Tuesday’s workout. They won’t alter that attack.

“More of the same,” BNL coach Jeff Allen said when discussing his talking points for the next phase. “Maybe a little better on defensive rotations, maybe a little bit better execution offensively. Clean up some stuff individually.”

“Wiggins is a really good point guard,” Allen said. “They are usually pretty athletic and competitive. It’s usually a good test to see where we are. We’re looking forward to it. We feel we have the athleticism to match up with them.”

The Eagles, with four seniors in the projected lineup, will also rely on contributions from Tyranny Brown (10 points, 4 rebounds) and 6-1 center Courtney Lee (7 points, 8 rebounds). That’s an experienced cast with a new look on the sideline as Cassie Wiseman succeeds Rick Risinger as head coach.

Wiseman, a former assistant at Hamilton Southeastern for 8 seasons, was an Indiana All-Star for the Eagles in 2004 and played four years at Butler. She served as Risinger’s assistant the last two years.

Lee’s presence is the middle, and BNL’s ability to defend inside and rebound, will be one to watch. The Stars will start basically five perimeter players and bring in more off the bench. They can shoot and score (as Irye Gomez proved while hitting 6 treys and totaling 22 points in the intrasquad workout). But as coach Norman Dale stated in “Hoosiers”: “I’ve seen you guys can shoot but there’s more to the game than shooting. There’s fundamentals and defense.”

“Our big weakness this year is rebounding,” senior Irye Gomez said. “I want to see if we can actually sit down and guard, rebound when we need to.”

BNL could meet Heritage Christian in the regular season. The Eagles will compete in the two-game holiday tournament at BNL on Dec. 22, although the teams will start the event in opposite brackets.

“That’s a long way away,” Allen said. “Teams at the end of October versus the end of December, it’s a big difference. We’ll see how it goes.”

Tickets for the scrimmage must be purchased in advance in the BNL athletic office. No tickets will be available at the door. Capacity will be limited to 1,000.

BNL learned it has already lost a regular-season game because of the virus. The road game with Mitchell on Nov. 14 has been cancelled as Mitchell suspended extra-curricular activities through Nov. 16. BNL is currently looking for a replacement opponent on the schedule.

In addition, the original opener with Mooresville has now been postponed to Nov. 25. That means the season opener – barring any other changes – is now set for Nov. 17 at Bloomington South.

Game notes: Cassie Wiseman is the new coach of the Eagles. She replaces Rick Risinger, who retired after winning seven state championships between 2006-2016 and going 330-75 in 17 seasons. BNL could face Heritage Christian in BNL’s holiday tournament on Dec. 22.