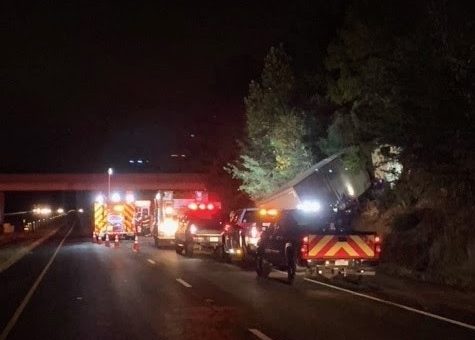 Shortly after 4 a.m. Saturday, a 2015 Nissan Versa Note traveling northbound on I-65 near the 26.5 mile-marker struck a deer in the roadway.

The vehicle was disabled due to the crash and remained partially in the right-hand lane. The driver, Veronica McCall of Crothersville, Indiana, then exited the car due to its position in the road.  A short time later, a 2014 Volvo Semi Tractor-Trailer approached from the south and struck the unoccupied Nissan Versa from behind.

After colliding with the car, the semi traveled off the east side of I-65 and up an embankment coming to rest in a treeline.

The driver of the semi-truck required extradition and, due to weather conditions, medical helicopters were not able to respond.

The semi-truck driver, 71-year-old Johnny G. Skarb of Wonder Lake, Illinois, was pronounced dead at the scene by the Scott County Coroner’s Office.

Next of kin was notified by the Scott County Sheriff’s Department.

The driver of the Nissan was not injured in the crash.

I-65 northbound remained closed until approximately 9:30 a.m., and all northbound traffic was diverted off onto US31 while the interstate was closed.