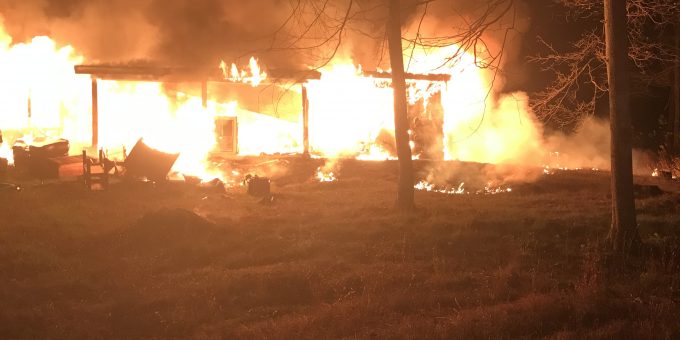 The call was dispatched to Shawswick and Pleasant Run Fire Departments at 8:53 p.m. They were later joined by Marion Township and Oolitic Fire Departments to bring the fully involved residential fire under control.

“I was asleep when I woke up to the fire,” said Benjamin Vibbert of Bedford. “I had a fire in the fireplace. The home did have any electricity,” said Vibbert. “I am just glad I got out safe,” Vibbert concluded.

Vibbert was the only occupant inside the home at the time of the fire. He was treated at the scene by Seals Ambulance crews for smoke inhalation. He refused further medical treatment and did not go to the hospital.

The home was being rented by both Benjamin and Tiffany Vibbert. There is not an insurance policy to cover any losses.

The fire departments brought 16 fire engines and over 25 fire firefighters to battle the blaze.