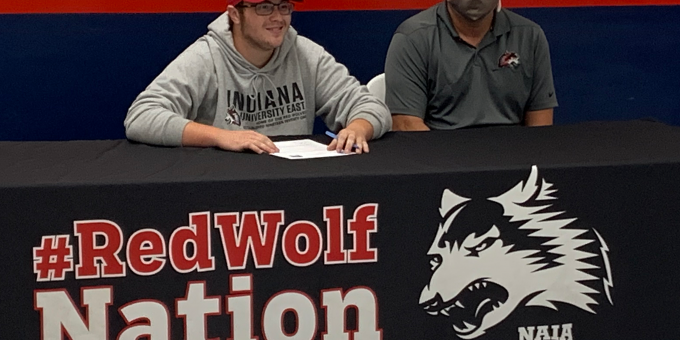 BEDFORD – For all the stories surrounding the COVID-19 virus and what it has cost in terms of lives, normalcy and sports, here’s one with a silver lining.

When the virus outbreak forced the cancellation of all spring sports in 2020, Bedford North Lawrence junior Jackson Jones got angry. Rather than sit and sulk, rather than bemoan the fact he lost a huge opportunity to prove himself on the golf course, Jones went to work.

On Friday afternoon, the senior reaped the reward, signing to play college golf with IU East, an NAIA program. Considering Jones has yet to crack the top five with the Stars, considering he played only a handful of summer events for exposure (the good kind, of course) to college coaches, it’s quite a Jim Valvano moment.

After filling out a recruitment form, after a campus visit to IU East, after a driving-range session, Jones was offered his life dream, a chance to play college golf.

“I feel very fortunate,” Jones said. “This opportunity is huge for me. As a kid growing up, you want to say you played college golf. I‘m glad it has come to this. The hard work is paying off.”

For his first two years with the Stars, Jones was on the fringe, just outside the top five that eventually compete in the state tournament. He was psyched for the 2020 spring campaign. And then it was yanked away.

“I was pretty mad,” Jones said. “That was the first BNL team that wasn’t really locked in with the top five. So I thought that was going to be the first year to see who was made to earn it.

“After my junior season got cancelled, it lit a fire inside me. I was really looking forward to my junior season, that was the year I thought I would be able to do something. It really motivated me to work harder.”

Recruiting is such a gamble on many levels. IU East coach John Gordon saw something he liked, offering Jones a chance to compete with 10-15 other athletes on the roster for spots in the fall and spring campaigns once he arrives on campus.

“He’s in position to see progress,” Gordan said. “He looks good on the golf course. We’re really excited to have him.”

“It was just perfect,” he said. “The golf team is really solid. I just think everything about the campus, the school, was perfect.”

Jones, currently taking swing lessons with Anthony Bradley (the head golf professional at French Lick Resort), will spend the fall and winter in training, holding some breath to make sure spring seasons aren’t erased again. Now, instead of being one in the mix for a top-five position, Jones will have some game to prove and earn his spot.

“He’s such a positive kid,” BNL coach Mike Wright said. “Kudos to Jackson to put himself out there, to have the confidence in himself to go for it. He just wants to play college golf.”