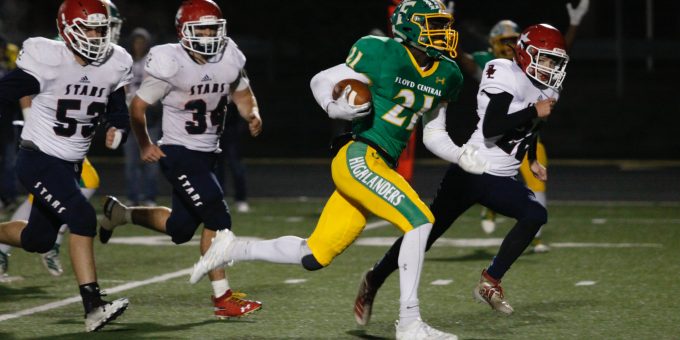 BEDFORD – The pre-game hyperbole was off the charts. The Game of the Century in the Hoosier Hills Conference. And that was not a stretch, given the age of the current century. For the first time in 17 years, someone had risen to challenge Columbus East.

Floyd Central was in position to end the incredible East league streak. The Highlanders had assembled a great team, they were at home to meet the mighty Olympians. Everyone was watching.

How does a team handle the aftermath? The Highlanders answered that emphatically, blowing out Jennings County before turning their attention to a possible sectional opponent. As the defending sectional champion, this week’s clash with Bedford North Lawrence might mean a little more.

“We were disappointed in ourselves,” FC coach James Bragg said when discussing the East showdown. “It might have been the best thing to happen. It kind of humbled us. We quit reading our press clippings and made us realize our goals are playing in late November.”

The Highlanders (5-2, 3-1 in the HHC) deserve the clips. They had the league’s most balanced offense with running back Wenkers Wright, quarterback Tristan Polk and receiver Kaleb Quenichet (until Quenichet suffered a broken collar bone the week of the East clash).

Wright, an Illinois State recruit, has rushed for 724 yards (a 7.8 average and 8 touchdowns). Polk has thrown for 1,182 yards (completing 67 percent) and 13 TDs. That offense is anchored behind offensive lineman Zen Michalski, a 6-6, 285-pound senior who originally committed to Louisville before finally signing with Ohio State.

“They’re tough to game-plan,” BNL coach Steve Weber said. “You go in and think about what we have to stop, what we have to do. Can the quarterback run or pass? Well, both. Do they have a good tailback? Yes. So it’s hard to prepare. You can’t take one away because they have the other complements.

“You’re not going to stop Wright. You have to stop the big hits, make them march the field and hopefully they make a mistake. The best thing to do is try to keep them off the field. We’ve not been successful at that the last couple of games.“

Wright had two huge games against BNL last year, running for 148 yards in the rain during a 29-21 regular-season win, then exploding for 219 yards and four scores in the sectional rematch. Polk was 15 of 19 for 234 yards during that 44-30 victory that propelled FC toward the title.

“We’ll find out,” Weber said. “I think the kids are so young and nervous, by the time the game has caught on, we’re so far behind. They don’t start very well and it’s hard to grasp why.

Floyd is certainly capable of offensive eruptions, similar to those absorbed by BNL in previous weeks. Last week, the Highlanders scored 48 first-half points in only 10 plays against the Panthers.

“In BNL, I see a lot of heart,” Bragg said. “We know they’ll be ready to play. We’re not overlooking them at all.

“Bedford is a tough place to play. We always go there thinking we’re down seven points, that’s the mentality you have to take. We have to handle that, stay focused. They’ll run the option to death, catch you asleep, and their quarterback (Brye Lewis) can take it to the house. We have to hit him hard and make him pitch, immediately get the ball out of his hands.”

Last meeting: Last season, the Highlanders swept a pair of games from the Stars, winning the regular-season clash 29-21 and the sectional rematch 44-30.

Game notes: Floyd Central is playing its first game on natural grass this season. BNL has yet to win a home game in 2020. The Stars haven’t gone winless at home since 2013.