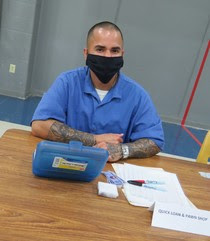 The program is designed to give each participant a realistic idea of the challenges they can expect to face the first month following their release.  After directions from the program leader, each participant received a packet of information with tasks to complete within weeks of their return to the community.

Examples of tasks to complete included many things most people would take for granted, such as how to get an identification card, finding a place to live and seeking meaningful employment.

To make the simulation realistic there were several tables set up to illustrate various services within the community.  Then, on their own, the men had to prioritize the tasks and then purchase transportation to move from table to table, much as if taking a taxi or Uber, if they did not have transportation tickets in their original packet. Some men made their first priority to get a job, only to find out the employer needed to verify their identity and needed their social security number.  So, in this controlled simulated environment, each participant experienced the obstacles, and stress, they could encounter in their first weeks of freedom.  This helped reinforce the importance of proper planning to ensure their transition back to society would be as successful as possible.

“Each time a re-entry simulation is conducted we receive positive feedback from the participants.” said Kevin Gilmore, the Deputy Warden of Re-Entry. “The simulation illustrates the struggles and challenges the men may face when transitioning from incarceration back to the community.” Gilmore concluded, “The end goal is to help the men understand the importance of proper planning and to take advantage of the services we offer while they are incarcerated.”

Offender Jose Rodriquez was one of the volunteers who helped with the simulation. When asked his thoughts about the experience, Rodriquez said, “While we don’t all have equal opportunity, we all have an opportunity to be better than we were yesterday. Those that participated in the Re-Entry Simulation were given an opportunity to learn even more about how to do that.”

Offender Dominic Woodward, standing to the right, was a participant.  Woodward said, “The Re-Entry Simulation was a realistic look at just how difficult entering back into society is.  Yet at the same time, it was also a good way to show that if you worked hard enough and wanted to succeed bad enough, the tools to do so are available to everyone.”

Offender Shane Robinson was a participant as well.  Robinson said, “The reentry simulation was a good exercise and benefitted me a lot. It helped me find resources for jobs and how to get small business loans.”