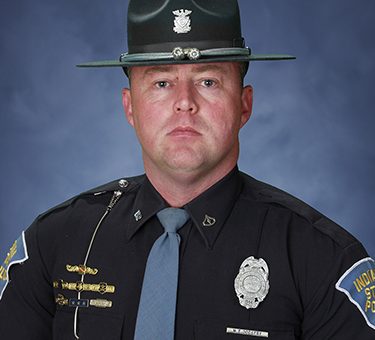 (SOUTH BEND) – On Saturday night Master Trooper Mick Dockery’s shift took an unexpected turn when a passing motorist alerted him to a nearby home that was on fire.

Just after 10:00 p.m. on September 12, 2020, Master Trooper Mick Dockery was on a traffic stop in the area of Edison Road and Crestwood Boulevard in South Bend, IN when a passing driver alerted him that a house was on fire down the street.

Dockery released the driver from the traffic stop and went eastbound on Edison Road. He quickly found a house in the 3000 block of Edison Road that had the east side of the house and garage fully engulfed in flames.

As Dockery ran towards the front door of the house, he saw a male attempting to open the front storm door but was unable to do so. Dockery forced the door open so he could get the male out of the house. The male disappeared back into the house yelling he needed to get his dog out of the house.

Dockery yelled into the house asking if anyone else was in the house when he saw a female that appeared disoriented in the front room of the house. Dockery entered the home and dragged the female from the home while he yelled for the male to get out of the smoke-filled house.

As Dockery returned to the burning home, the male came back out of the house, still yelling that he needed his dog. A short time later a German Shepherd ran safely from the home.

True to form, Dockery finished out his shift after being medically cleared at a local hospital.