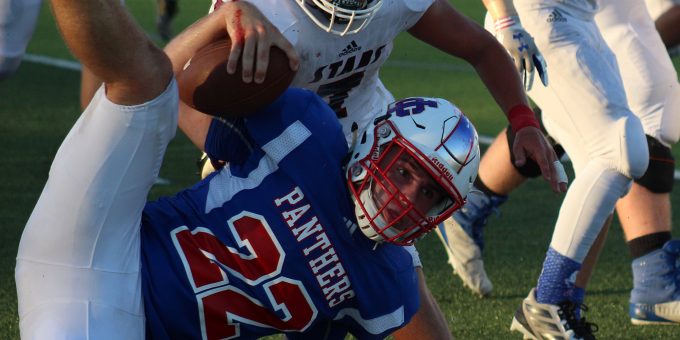 NORTH VERNON – To quote the mind-boggling Matrix, “You must be able to see it, Mr. Anderson. You must know it by now.”

Thrust into duty when the starting running back hobbled off on the second play of the game, BNL junior Zane Anderson ran for 118 yards and three tough touchdowns, powering the Stars to a 35-6 victory over the Panthers on Friday night.

BNL’s vastly improved defense picked off two passes, including a score by safety Grant Todd, and the Stars slowed down Jennings workhorse Peyton Hayden en route to their first win of the 2020 campaign.

Anderson, shouldering double duty as the middle linebacker, was summoned when Gavin Scherschel suffered a left ankle injury amidst the line scrum on his first carry. He responded with a hero’s resolve. Nothing fancy, just grit.

“He did a great job,” BNL coach Steve Weber said. “He ran the ball hard, found the holes, sliced.”

With the Panthers chasing BNL quarterback Brye Lewis with the tenacity of Agent Smith, Anderson found gaps and muscled through. Credit the young offensive line for creating those, credit the triple-option reads.

“I don’t know how to explain it,” Anderson said. “I got the opportunity, took it and did what I’ve practiced and been taught. Run hard and do what you’re supposed to do.”

BNL (1-2, 1-0 in the Hoosier Hills Conference) started slow, getting the first score from Todd as he picked off Michael Haines and raced 35 yards for the touchdown.

The Panthers (0-3) answered with their best drive, 9 plays and 68 yards, aided by a pass interference penalty. Haines hit Hayden over the middle for a 20-yard TD that forced a 6-6 deadlock on the first play of the second quarter.

But from that point, BNL dominated. Lewis broke free for 30 yards, setting up Anderson’s first TD from 10 yards as BNL took a 14-6 lead at the half. Another Lewis blast, this one 29 yards, led to the second Anderson score, from the 4, with 7:04 left in the third.

The next series was the dagger. Hayden attempted a late option pitch, with Kaedyn Bennett recovering the loose ball. On the next play, Lewis connected with Dylan Nikirk for a 27-yard TD and a 28-6 lead.

Anderson added the final TD, roaring away from 40 yards with 4:53 left.

Lewis finished with 75 rushing yards as BNL totaled 251 on the ground. The other key was the three turnovers BNL’s defense forced.

“That’s what we’re hoping the defense does, create some confusion, get some pressure,” Weber said. “Other than a slow start, then we started believing in ourselves. We took off. We stuck with it. The defense gave us that opportunity. In the past, we’d have been down 21-0.

“Hopefully we got some confidence. Now we get some guys back.”

Hayden totaled 111 rushing yards while Haines was 10 of 24 passing for 87 yards with the two interceptions (the second by Maddox Ray). Bennett also had a sack in addition to his fumble recovery.

“This win really boosts our confidence,” Anderson said. “After this, we’ll keep winning. It keeps our energy up.”

BNL will visit Madison next week.