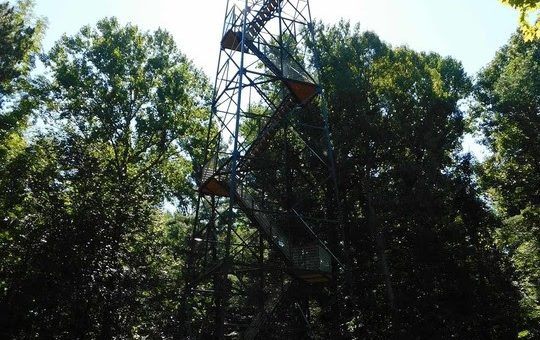 (SPENCER) – The fire tower at McCormick’s Creek has re-opened to the public after decades of being closed.

During the 1980s, the cab atop the tower was locked by park management due to vandalism and for safety reasons, and it wasn’t until Friends of McCormick’s Creek group funded the tower’s restoration in 2019 that the public was able to enter — but only during guided hikes.

Seasonal naturalist Barbara Filtri recalled a special moment from the first tower hike she led after the restoration.

“I had an elderly couple with me,” she said. “They took their time climbing to the cab, where they told me that this was where he had proposed when they were young.

“It was really amazing to share in this memory and create a new one when they were able to return to this special place.”

To protect the restoration efforts, the State of Indiana funded construction of a plaza around the base of the tower. That work was completed earlier this month by Kilbride and Sons, the same contractors who restored the tower.

“We’ve worked on a number of historic structures in State Parks, and we always like to match the craftsmanship of the time,” Mike Kilbride said. “We looked at the masonry done by the CCC in other park structures and made sure to match the style with the plaza.”

To find a schedule of programs, check calendar.dnr.IN.gov, or contact the nature center.