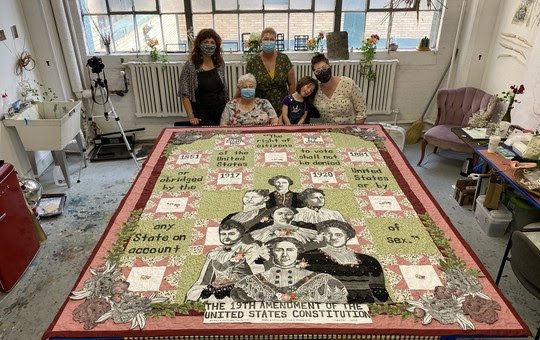 (INDIANAPOLIS) – Indiana Women’s Suffrage Centennial Commission Wednesday unveiled two original works of art that will remain a part of the State of Indiana’s permanent public art collection. The works of art commemorate the ratification of the 19th Amendment which guaranteed women’s right to vote and went into effect 100 years ago today.

The two original works of art include a quilt titled “Together” by Indianapolis artist Kassie Woodworth and a painting titled “nINeteeth by Decatur artist Shelby Nower.

“These two pieces of art are such powerful representations of the profound impact the 19th amendment had on our state and nation,” said Lt. Governor Suzanne Crouch, chair of the Indiana Women’s Suffrage Centennial Commission. “I appreciate Kassie and Shelby sharing their talents with us and paying homage to the women’s suffrage movement.”

“Together” by Kassie Woodworth

Kassie Woodworth’s “Together” will be located on the fourth floor of the Indiana Statehouse. The quilt utilizes the traditional mediums of fabric, embroidery, and beading with other artistic mediums such as printmaking, drawing, and screen-printing. By using non-traditional quilting mediums, the quilt transforms the familiar, domestic imagery of quilting into a “high art” two-dimensional piece of art.

When asked what creating this piece meant to her, Woodworth said, “I am extremely grateful for the rights I have today compared to women only a century ago. Women and people of color have and continue to fight for equal rights in society. The Women’s Suffrage Movement was only the beginning. This project allowed me to express the importance of women’s role in society and how significant the 19th Amendment was, and is, to women of the United States of America.”

Shelby Nower’s “nINeteeth” will be located in Lt. Governor Crouch’s office. The life-size painting depicts women triumphantly voting for the first time. Names of prominent suffragists are painted onto the clothes of the women voting to pay homage to these historic women.

“This amendment represents a milestone for women in our country,” said Nower. “It’s important for us to commemorate and celebrate it. Being able to use my art to tell that story and also add my own mark on history is an honor.”

The Indiana Women’s Suffrage Centennial Commission was established by House Enrolled Act 1394 during the 2019 legislative session of the Indiana General Assembly and is chaired by Lt. Gov. Suzanne Crouch.

Kassie Woodworth is a visual artist in Indianapolis, Indiana. Kassie makes a variety of work including sculpture, printmaking, and mixed media. She graduated from Herron School of Art and Design in 2019 with a B.F.A. in Sculpture. Most of her work investigates patterns, habits, movement, and growth of nature. Kassie has exhibited in various galleries in Indianapolis including the Indianapolis Arts Center, the Indiana State House, Gallery 924, Indianapolis Arts Garden, SAKS Fifth Avenue, Berkshire, Reese, and Paul Gallery at Herron, Butler University, The District Theatre, The Harrison Center for the Arts, and the Tube Factory.

Shelby Nower is a fine artist and muralist who specializes in creating colorful characters on a large scale. She graduated from Herron School of Art and Design in Indianapolis as a Drawing and Illustration major in May of 2020. Originally from St. Louis, Missouri, Shelby has made her home in Decatur, Indiana as a member of the creative group Artisan Collective Enterprise 40.8 (ACE 40.8). She has left her mark all over the walls and alleyways of Indiana, bringing her imaginative creations to life.