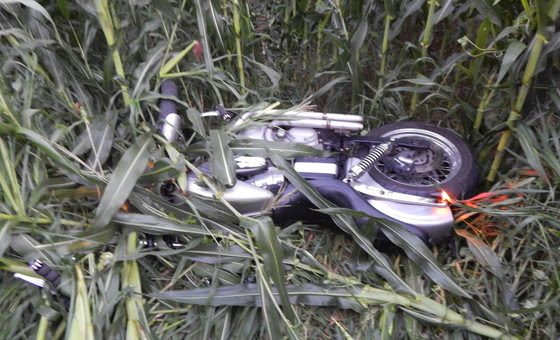 (HARRISON CO.) – A motorcyclist who led an ISP Trooper on a short pursuit Monday evening was flown from the scene after leaving the roadway and crashing in a cornfield.

Shortly before 8:30 p.m. Monday, Indiana State Police Sergeant Katrina Smith was patrolling on SR 135 in Harrison County and attempted to stop the rider of a Harley-Davidson motorcycle for traveling 91mph in a 55mph zone.

After Smith turned around, the rider accelerated and turned east onto West Bradford Road before turning south on South Bradford Road. As the vehicle continued south at high speeds, it failed to navigate a 90-degree turn in the roadway and traveled off the roadway and over an embankment, becoming airborne. The bike came to rest approximately 30 yards into a cornfield on the south side of the road.

The rider, later identified as 29-year-old Brandon Lee Schmitt, of Fredericksburg, was found approximately 12 yards past the motorcycle. Sergeant Smith provided first-aid to Schmitt while awaiting EMS. Schmitt was later was flown to University Hospital with multiple injuries; however, his injuries were not considered life-threatening.

As a result of the pursuit, Schmitt was arrested on charges of resisting law enforcement with a vehicle, driving while driver’s license suspended with a prior conviction, reckless driving, operating a vehicle without a motorcycle endorsement.