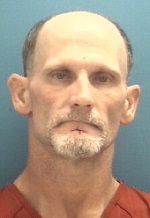 (COLUMBUS) – A Louisville man was arrested after police say he threatened a Walmart worker with a knife while trying to steal a computer hard drive Wednesday.

Columbus police say that they were called to the Walmart store on Whitfield Drive around 2:20 p.m. Wednesday.

A store security officer told police that he believed 45-year-old Paul Horn was attempting to steal a computer hard drive. When the employee followed Horn to the bathroom, Horn threatened the employee with a knife.

Horn was arrested on a charge of intimidation with a deadly weapon and an outstanding warrant in another county.