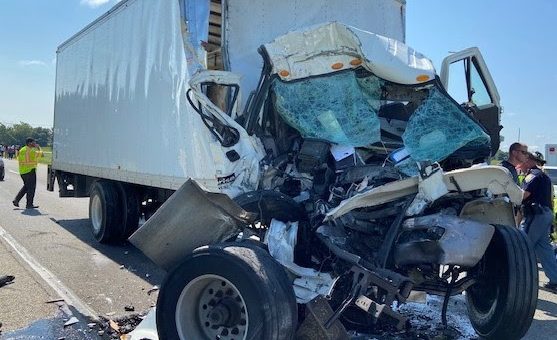 (GREENSBURG) – A Seymour man was involved in fatal accident on I-74.

Saturday at approximately 11:25 a.m., the Indiana State Police responded to a two-vehicle crash on I-74 near Greensburg, which claimed the life of an Indianapolis man.

According to ISP Master Trooper Jason Hankins, the westbound lanes of I-74 were slowed near the 134-mile marker due to two separate crashes that had occurred in the area and caused a traffic backup.

A 2018 International box truck being driven by 37-year-old Kevin J. Porter II, of Indianapolis, failed to stop for the slowed traffic.  Porter’s vehicle collided with the rear of Cranfill’s trailer.

Both vehicles came to rest in the westbound lanes of I-74.

Porter sustained fatal injuries in the crash.  He was transported to Decatur County Memorial Hospital in Greensburg, where he died from his injuries.

Toxicology results are pending and the investigation is ongoing at this time.

The westbound lanes of I-74 were closed for approximately three hours for crash investigation and cleanup.