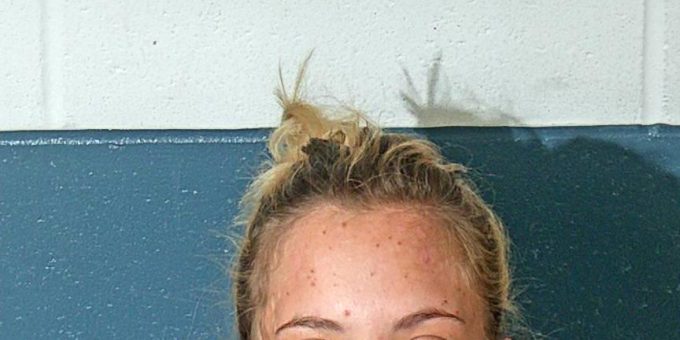 (BEDFORD) – A Bedford woman was arrested on Saturday morning on a warrant.

According to a probable cause affidavit, on July 8th at 1:51 a.m. Bedford Police officers were called to 155 J. Hunter Dr. after a report that a man had possibly overdosed.

When Bedford Police arrived they found 29-year-old Stanley Langley found Langley incoherent and slouched down on the couch just inside of the residence. There were two females present; Bailey Harris and McKenzie Harrison. One of the women had given Langley a dose of Narcan before the police arrived. An IU Health Hospital ambulance arrived and began treatment of Langley.

While on the scene police found a multi-colored rubber smoking pipe sitting next to Bailey on the couch. The pipe contained a burnt plant-like material that later field-tested positive as marijuana. Police also found a “loaded” syringe laying on the ground only feet from where Langley was sitting full of heroin.

Officers made a safety sweep of the residence and observed a syringe laying in plain view just inside of another room sticking out the top of a purse. There was also a metal grinder sitting in plain sight sitting on the counter in the bathroom.

Police contacted Bailey’s father, Mark Harris, who owns the home, by phone. Harris told police Bailey was allowed to be at the residence but was not supposed to be there and requested a trespass form be served on Langley. Mr. Harris also advised that officers could search the home.

The liquid from the syringes and the white residue from the plastic bag was tested yielding a positive result for heroin. The plant-like material from the grinder also tested positive for marijuana.

Langley returned to the residence after being released from the hospital. Both he and Harris were read their Miranda Rights and told police they had been with Harrison all evening after she picked them up in Greene County.

Harris and Langley told police they had purchased the drugs in Bloomington.

Harrison left the apartment before police could speak to her.

A no trespass order was served on Langley.

Langley was arrested on July 22nd on charges of possession of narcotic drug – heroin, unlawful possession of a syringe, and possession of marijuana and drug paraphernalia. He has pleaded not guilty to the charges and is scheduled for a pretrial conference in Lawrence County Superior Court II on September 24th at 9 a.m.

Bailey has not been arrested.