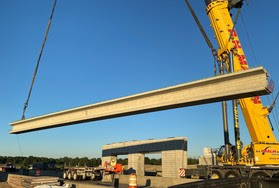 (MARTINSVILLE) – Some of the I-69 Finish Line progress to date will mean a big safety benefit for students returning to Martinsville High School later this month.

The Grand Valley Boulevard overpass opened in June and a sidewalk now connects the school with businesses on the east of State Road 37.

Martinsville Fire Chief Kevin Greene talks about the importance of the new overpass.

Indiana University is gearing up for the fall semester and students are beginning to drop off their items at dorms.

Students and families should be aware of several changes along the I-69 Finish Line corridor:

The I-69 Finish Line project office remains closed temporarily, but our Project Team stands ready to assist. Call 855-INDOT-4U or email INDOT@indot.in.gov to connect with our team. Find the latest news, information and traffic updates at I-69FinishLine.com, Facebook, Twitter and Instagram