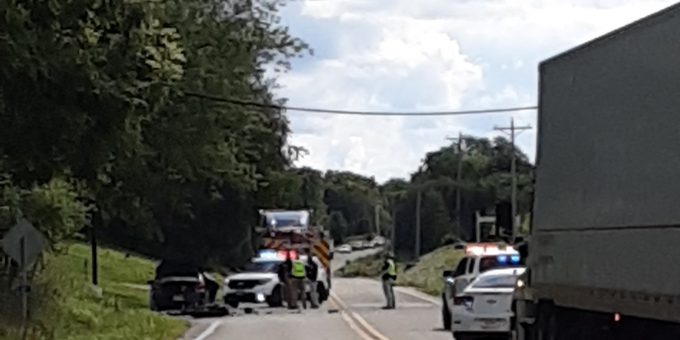 (MITCHELL) – A Springville man was injured after his motorcycle was struck on US 50 at Cassidy Lane Wednesday afternoon.

According to a Lawrence County Sheriff’s Department report, 24-year-old Kyle Courtright was traveling west on US 50 West in a 2013 Dodge Avenger when he attempted to turn left onto Cassidy Lane. At the same time 20-year-old Cole Sweet, of Springville, was traveling east on US 50 West on a 2014 Triumph Street motorcycle.

Courtright started to turn onto Cassidy Lane and turned into the path of the motorcycle.

Sweet, who suffered a possible fractured arm and other injures, was taken from the scene by ambulance to a landing zone where a Stat-Flight helicopter transported him to the University of Louisville Hospital.

U.S. 50 West was closed for several minutes in both directions while emergency personnel worked the scene.

Responding to the scene was the Bedford Fire Department, Marion Township Volunteer Fire Department and two ambulances from the Seals Ambulance Service.