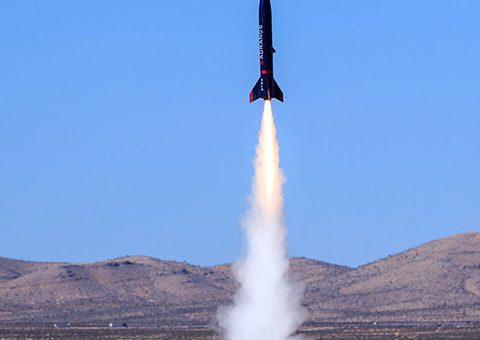 One of these contracts will use Purdue’s Zucrow Laboratories’ heated air system, which is capable of simulating Mach 4 environments for hypersonic research.

“These tests will determine ALITEC’s functionality within a hypersonic propulsion system referred to as a solid-fuel ramjet,” said Chris Stoker, Adranos’ CEO. “A solid-fuel ramjet is among the simplest of air-breathing rockets that can substantially increase firing range over traditional solid rocket motors.”

These systems use an initial-stage, traditional solid rocket booster to reach necessary velocities that then enable a second-stage air-breathing system to carry payloads over long distances.

Adranos closed out a funding round earlier this year raising $1 million. Last year, Adranos successfully tested a prototype rocket powered by its ALITEC rocket fuel and was the winner of the Army’s first-ever xTechSearch competition.

Technology used by Adranos is licensed through the Purdue Research Foundation Office of Technology Commercialization, which patented the technology.

Adranos Inc. regularly performs research and development of energetic materials and is primarily focused on increasing the range in missiles and other firing systems. Adranos’ capabilities include the manufacturing and testing of rocket motors and other related activities.

The Purdue Research Foundation Office of Technology Commercialization operates one of the most comprehensive technology transfer programs among leading research universities in the U.S. Services provided by this office support the economic development initiatives of Purdue University and benefit the university’s academic activities through commercializing, licensing and protecting Purdue intellectual property. The office recently moved into the Convergence Center for Innovation and Collaboration in Discovery Park District, adjacent to the Purdue campus. In fiscal year 2020, the office reported 148 deals finalized with 225 technologies signed, 408 disclosures received and 180 issued U.S. patents. The office is managed by the Purdue Research Foundation, which received the 2019 Innovation and Economic Prosperity Universities Award for Place from the Association of Public and Land-grant Universities. In 2020, IPWatchdog Institute ranked Purdue third nationally in startup creation and in the top 20 for patents. The Purdue Research Foundation is a private, nonprofit foundation created to advance the mission of Purdue University. Contact otcip@prf.org for more information.

Purdue University is a top public research institution developing practical solutions to today’s toughest challenges. Ranked the No. 6 Most Innovative University in the United States by U.S. News & World Report, Purdue delivers world-changing research and out-of-this-world discovery. Committed to hands-on and online, real-world learning, Purdue offers a transformative education to all. Committed to affordability and accessibility, Purdue has frozen tuition and most fees at 2012-13 levels, enabling more students than ever to graduate debt-free. See how Purdue never stops in the persistent pursuit of the next giant leap at purdue.edu.