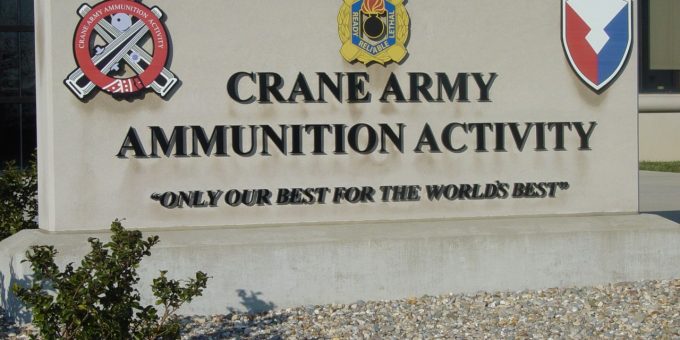 (CRANE) – Crane Army Ammunition Activity maintains its capability to effectively ship, store, demilitarize and produce top tier munitions for the warfighter by continuously modernizing processes and equipment. Crane Army’s innovation efforts are vital to the troops in harm’s way whose lives depend on having more munitions faster.

Crane Army tested a process to more quickly disassemble these anti-personnel rounds using a robotic arm and mechanical lathe. After months of line development and test runs, the project was successful and completed ahead of schedule.

“We’ve definitely added another in-house capability with the development of this computer numerical control machining and robotics demilitarization,” CAAA Mechanical Engineer Sonny Dant said. “We can also expand upon it in the future for other munition types.”

The robotics include a mechanical arm that grips and places rounds into a lathe which cuts the munitions open. This allows for internal components to be separated and recycled locally or destroyed. The programming can be altered to accommodate different types and sizes of munitions. These improvements accelerate the demilitarization process dramatically.

“The robot can be programmed to move faster and speed up the process, to be more operator friendly and to enhance other qualities to make the process work as well as possible,” Crane Army Explosives Operator Supervisor Dave Bowman said. “For example, there was a lot of work done to program the robot to hold the round at the perfect spot.”

CAAA collaborated with Brough, a programming contractor, to ensure that the programming suited the operation and met mission requirements.

“Procuring the robot programming services was the biggest challenge. Actually programming the robot became a much larger task than originally expected, but observing CAAA explosive operators successfully operate the controls and finish the project ahead of schedule was very rewarding,” said Dant.

The Crane Army employees involved credit teamwork for the project’s success and consider it vital for achieving other efficiency and modernization improvements in the future to continue to provide warfighters with quality munitions wherever and whenever needed. “It’s such a supportive, teamwork-centered environment from the top of management all the way to operators,” Bowman said. “We’ve all worked together to make sure this project is successful and it’s good to see everyone working on the shop floor to get this done.”

Crane Army Ammunition Activity produces and provides conventional munitions in support of U.S. Army and Joint Force readiness. It is part of the Joint Munitions Command and the U.S. Army Materiel Command, which include arsenals, depots, activities and ammunition plants. Established Oct. 1977, it is located on Naval Support Activity Crane.