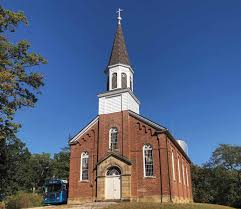 (UNDATED) – On Monday, Lt. Governor Suzanne Crouch and the Indiana Office of Community and Rural Affairs announced that twelve properties will receive funding through the Historic Renovation Grant Program including $100,000 to preserve the Chapel of Our Sorrowful Mother, an 1877 gable-front Romanesque style church located on Chapel Hill Drive in the Town of Ferdinand.

“Join me in congratulating these 12 business owners for receiving funds from the Historical Renovation Grant Program,” said. Lt. Gov. Crouch. “Preservation efforts like this ensure a future for our many vacant, neglected or historic properties that might otherwise be lost.”

The Historic Renovation Grant Program, in its fourth year, is a comprehensive grant program designed to preserve and rehabilitate historic properties in order to further incentivize downtown economic development. The funding for this year has been exhausted through the projects listed below and the program is now suspended until more funding is allocated next legislative session.

“We are excited to fund projects that stretch across the state, from New Albany to Wabash, both small and large projects,” said Matt Crouch, Interim Executive Director of OCRA. “These projects help preserve pieces of Indiana’s rich history to be enjoyed by residents and visitors for generations to come.”

Each property received funding for the renovation and preservation of exterior features. Such renovations include roof replacement, masonry restoration, repair and replacement of doors and windows, façade renovation, and/or chimney improvements.

KSTD Development, LLC is awarded $100,000 to rehabilitate and rebuild portions of the Shipman-McCord House, located in the Mansion Row Historic District of Downtown New Albany. The 1866 brick three-story building was built with extensive Italianate detailing, representing the city’s mid-19th century prosperity. The property was converted to government apartments during WWII and will remain as such after the renovation’s completion.

LCF Properties LLC is awarded $58,908 to preserve the exterior of the IORM building in the Town of Lagro. Located in the historic downtown, the funding will be used for repairing and preserving the windows, doors, storefront, and exterior brick walls. Plans for the building include hosting a business that will complement other local enterprises: coffee shop, bistro, Airbnb, and possible river recreational opportunities.

MH Properties is awarded $39,568 to preserve 706-708 Main Street in the Downtown Historic District of the City of Jasper. The 6,400 square foot structure has undergone several renovations dating back to 1888. The building was utilized as an express office in 1920 with coach buggies built on the second floor. The preservation will restore the building to its former luster showing the pride of the community. The building has multiple tenants including Primierica, Yourstory Photography, and Miligan Communications.

511 Inc. is awarded $30,000 for a roof replacement of 511 Wabash Ave, which is a neoclassical building in the City of Terre Haute. This 1892 building was originally constructed as a bank but in 1993, it underwent a historic rehabilitation to house the law firm of Cox, Zwerner, Gambill, and Sullivan. That firm will continue to occupy the building.

The Lagro United Methodist Church is awarded $45,860 to preserve twenty-two windows, of the Gothic Revival style building built in 1915. The largest windows each tell a story and are titled “Come Unto Me”, “The Good Shepherd”, “Christ in Gethsemane”, and “The Sower”. Early church members paid $650 to have the windows created and installed by artists of Empire Glassworks in Columbus, Ohio.

The Friends of Ward Township No. 5 Randolph County are awarded $7,350 to assist in recreating the missing bell tower as it appeared in the 1891 one-room school construction. Located in the City of Winchester, the building has been under renovation since 2015 and is nearing completion. The restored school will host elementary students during field trips who will experience education as administered during the one-room school era and will also be available for special events.

Jason Long is awarded $18,421 to preserve the Sherman Row House located in the Town of Vernon. This building was built in 1830 and was eventually used as part of the Underground Railroad to assist in helping enslaved peoples gain their freedom in the mid-1800s. Slaves were once brought up from the Muscatatuck River and hidden in the tunnels dug underneath the building. Originally used as a hotel, the main level part is currently in use as a liquor store.

Brandon Denton of Denton Floyd Real Estate Group is awarded $100,000 to preserve the Masonic Temple for the Clark Lodge #40 Freemasons. Located in Jeffersonville, the neoclassical style masonic temple built in 1926, was designed by the notable Louisville-area architecture, Arthur Loomis. It was preserved from demolition by a joint effort between the City of Jeffersonville and Denton Floyd. The property will be utilized as the Denton Floyd Development Team headquarters.

The Children’s Museum is awarded $12,500 to preserve the Stutz House’s tile roof. Located in Indianapolis, the Craftsman resident was built in 1923 for the Stutz family. The Stutz House currently houses the not-for-profit organization, the Mapleton-Fall Creek Development Corporation. This project will help to continue this use and preserve the historic building.

Dickos Peterson & Metz Real Estate is awarded $68,754 to rehabilitate and revitalize two buildings located in the center of the commercial district of the City of Wabash. Built in 1900, it was originally designed as a hardware store but now houses the real estate office.

Bryan Van Duyne is awarded $8,639 to renovate the Reeve Building, in the City of Plymouth. Constructed in 1910, and currently a jewelry store since 2006, the existing roof of the Reeve Building will receive new rigid insulation, new flashing, and a new liquid membrane roof.