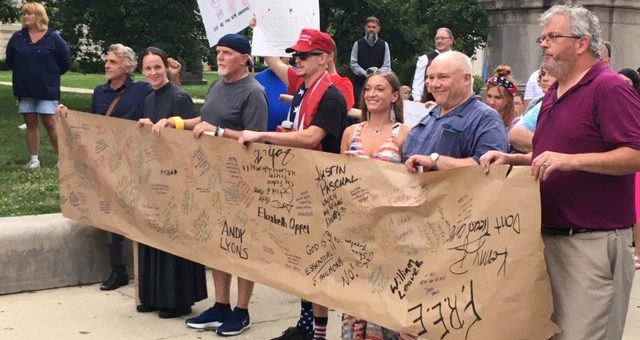 (INDIANAPOLIS) – Nearly 200 protesters including Lawrence and Monroe County residents rallied in the rain at the Indiana Statehouse Sunday and marched with banners of notes to the doors of the Statehouse demanding that Governor Holcomb stop the shutdown of the Indiana economy and end his campaign in support of face coverings.

Most of the protesters were not wearing masks.  Neither the City of Indianapolis or Marion County Health Department were present to issue fines or punishment.

According to Robert Hall, deaths from the virus have declined by 86% from the peak in April.  Deaths have declined from a high of 290 per week to only 40 deaths last week.

“It’s time to stop any shutdown of the Indiana economy.  Government overreach did not eliminate the spread of the China virus nor prevent deaths,” Hall added. “In addition, it is unnecessary to wear masks.  Masks have little effect on reducing the spread of the China virus and give a false sense of health safety.   Wearing masks can be harmful to your health causing oxygen deficiency and toxic carbon dioxide in your blood.  These should be choices for individual health, not mandates.  Making masks mandatory for all is an overstep.”